The life of the typical adult American 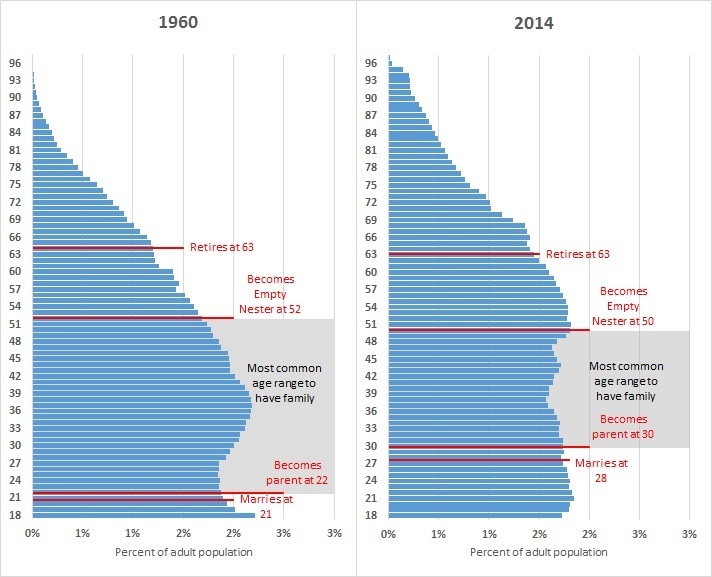 Chart data was calculated from Census surveys using IPUMS, University of Minnesota, as well as from Center of Disease Control vital statistics data.

Because people are living longer and marrying later in life, the average adult American will spend two decades more living outside of a nuclear family than in 1960. By 2014, the portion of the adult population within the common age range to have a family (highlighted in the chart above) had shrunk to 32 percent from 61 percent in 1960.

For most households, housing costs make up the largest portion of their budget. But the household types that have grown more common in recent decades, such as those living alone, with housemates, or as a single parent, on average have considerably lower incomes than nuclear families.  As the chart below shows, the difference in income as well as housing needs, translates to noticeably different living patterns across household types.

The change in the U.S. household distribution presents a challenge to those in the housing industry. Since the 1950s, home construction in the U.S. has been chiefly oriented towards nuclear families who are the most likely buyer of larger, single family homes. However, with the decrease in the number of nuclear families and the increase in those living alone (or with a roommate), the demand for smaller homes or rental properties, including apartments, has strengthened. Despite the change in household distribution, single family homes continued to make up over 2/3rds of new home construction until the beginning of the recent recession.

Since the recession, home builders have gradually begun to adjust to this trend. Apartment and condo construction has boomed in recent years, while single family home construction levels remain well below levels seen during much of the postwar era. Home builders, who in the past focused on developing large suburban single family homes to sell, such as Toll Brothers, have also begun building multifamily homes to sell or rent. 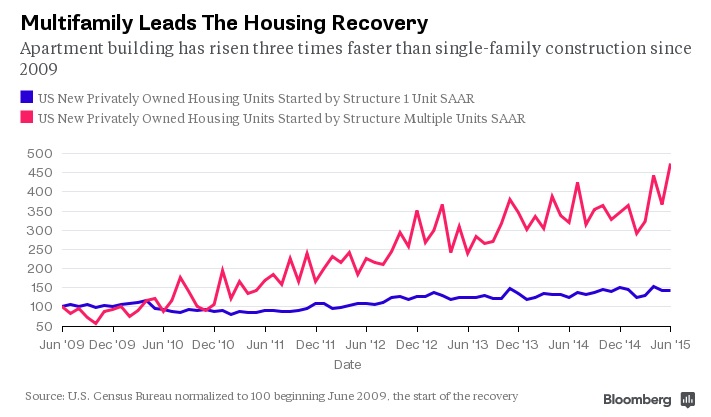 Chart is from Bloomberg Business

Still, a common assumption about the housing market is that as the economy continues to strengthen and Millennials finally settle down to have children, housing demand will shift back to prerecession patterns. But Millennials are on track to be the generation least likely to marry in the post-war era, while most of the U.S. population growth in the next decade is projected to be in the over-60 population. These population trends indicate further growth in non-nuclear family households who are less likely to have the financial resources or the need to buy a large, single family home. An alternative interpretation of the current housing market may be that it is not recovering so much as evolving.

To read more about changing household structures see: As families decline, living alone is now the most common type of household