Loudoun County, in Northern Virginia’s outer suburbs, was Virginia’s fastest growing locality in the 1990s and 2000s, nearly doubling its population each decade. Population growth in Loudoun, as in much of Virginia during the two decades was fueled by people moving out to newly built subdivisions on the edges of the commonwealth’s largest metro areas. Though Loudoun remains the fastest growing locality in the state, according to the 2015 population estimates released today by the Weldon Cooper Center’s Demographics Research Group, its growth has slowed considerably.

Several images from Google Street View were embedded in this post to show how different places in Virginia have changed in recent years. The first image is from before 2010 and the second image is of the same place more recently. All of the images are interactive, so you can scroll left and right or zoom to explore.

Virginia, like Loudoun, has had fewer people moving to it since 2010, while its positive balance of births and deaths is shrinking as its population ages. Virginia’s population growth remains concentrated in its Urban Crescent, which stretches from Northern Virginia through Richmond to Hampton Roads, with nearly 90 percent of population growth since 2010 located in the three metro areas. But aside from Loudoun County, seven of the ten fastest growing localities in Virginia since 2010 have been urban localities, a noticeable change from previous decades when most of Virginia’s cities had stagnant or declining populations. 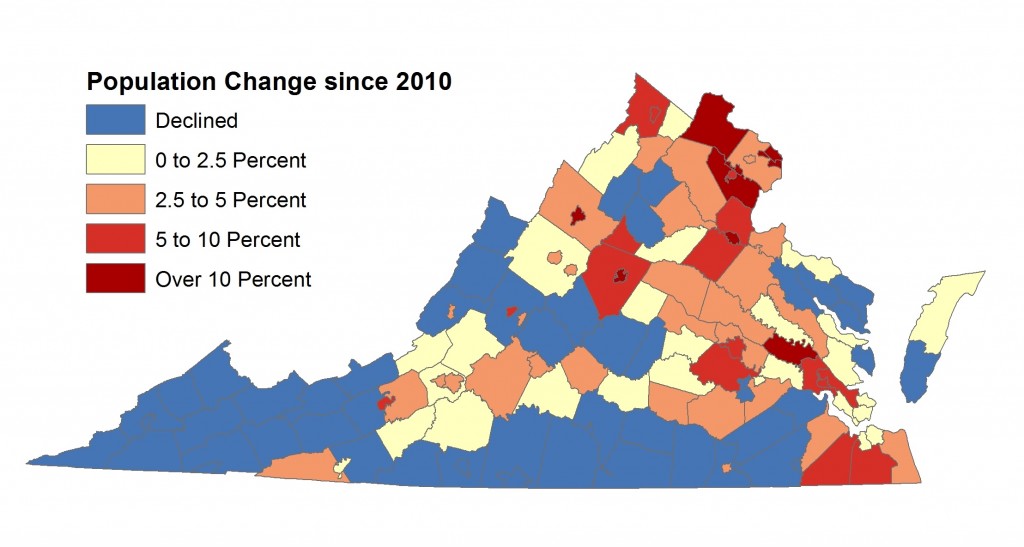 Alexandria, across the Potomac River from Washington D.C, is one of Virginia’s cities where  population growth has accelerated in recent years. Though Alexandria began growing again in the early 1990s, the redevelopment of underused lots in the city, such as Potomac Yard (pictured below), has helped make Alexandria one of the fastest growing localities in Virginia.

While building homes on underused urban land has helped drive population growth in many of Virginia’s cities, converting older commercial buildings into apartments and condominiums has also brought residents back into its downtowns. Since 2005, the conversion of dozens of Richmond’s commercial buildings into homes has created over 4,000 new housing units in the city. For decades, Richmond was steadily shedding residents, but after its population bottomed out in the 2000s, Richmond has grown faster than its neighboring counties this decade.

Though population growth has lessened in Virginia’s suburban counties, the most noticeable slowdown within Virginia has been in its rural counties and small metro areas outside of the Urban Crescent. The population of Virginia localities outside its three largest metro areas grew by 7 percent during the 2000s, but are on track to grow by only 2.5 percent this decade, in large part because fewer people are moving to these areas. The only county west of Blacksburg or bordering North Carolina that grew in population since 2010 was Grayson County, which received a boost from a new prison opening.

Much of rural Virginia is also aging rapidly. In many counties outside the Urban Crescent it is common to have twice as many residents over 60 than under 18. An aging population means that death rates are steadily rising and birth rates are falling. In 2011, for the first time, localities outside the Urban Crescent had more deaths than births. Now, most of Virginia’s rural counties are relying entirely on people moving in for population growth. 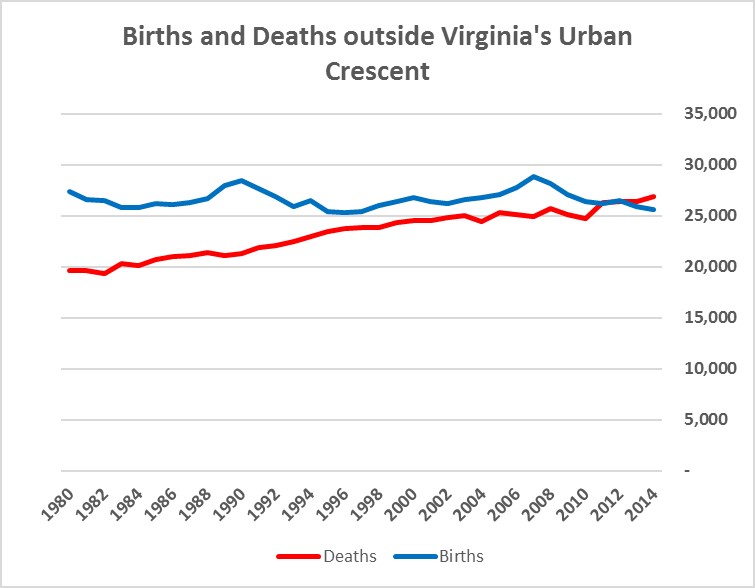 With five years of population data, (putting us at a midpoint in the decade),  some of this decade’s population trends may be more evident. Virginia and its suburban counties are still growing at a rate faster than the national average, but considerably slower than in previous decades. Given the amount of real estate investment going into Virginia’s cities in recent years, many are experiencing the strongest decade of growth in half a century. While migration to Virginia’s rural areas is likely to increase as the housing market recovers, many counties will find that relying entirely on migration usually means slower population growth.

If you would like to learn more about the trends driving Virginia population change, some related blog posts are listed below.

Could the “two-body problem” be contributing to rural brain drain?

As families decline, living alone is now the most common type of household