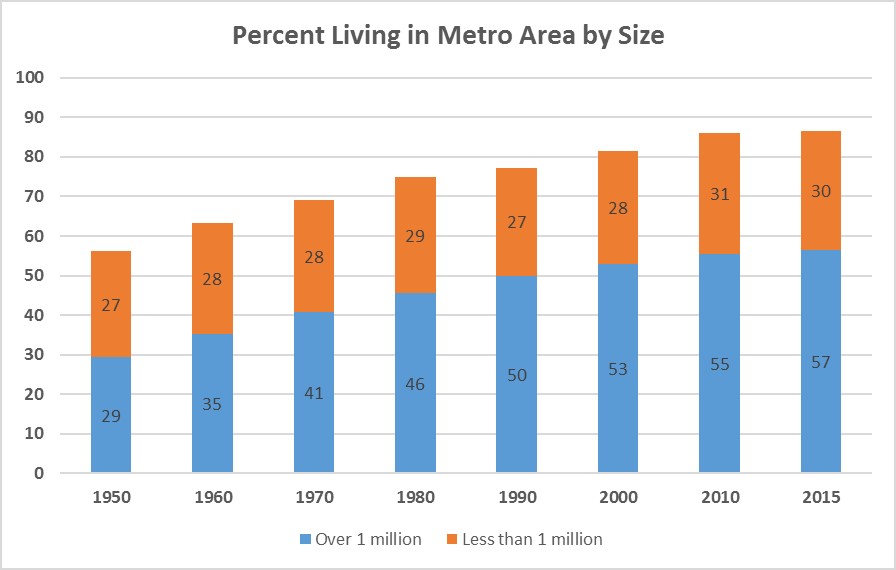 The expansion of metropolitan areas into rural America
The widespread construction of interstates and highways after World War II made it much easier for workers to commute longer distances to job centers. At the same time, agricultural employment declined in nearly every rural U.S. county, while manufacturing jobs in most small towns also began to disappear by the 1980s. The result of these two trends has been that residents in most rural counties have grown more dependent on nearby cities for jobs. Counties get included in a metro area once a certain percentage of their working residents are commuting into a nearby city, rather than participating in the rural county’s economy. In many rural counties, as the map below shows, the proportion of workers commuting to a nearby city has risen above a quarter of all workers, causing counties to become part of another city’s metropolitan area.

In Virginia, the portion of commuters who traveled over an hour each way to work rose from 6.5 percent in 1990 to 10 percent in 2014. But in rural areas that are within commuting distance of city centers, the percentage of residents who drove over 60 minutes to get to work often doubled or tripled in the same period. In some counties on the edges of large metro areas, such as Warren County, Virginia, located 70 miles west of Washington DC, it is common for between a quarter and a third of residents to commute more than an hour to get to work.

Percentage Commuting 60 to 90 Minutes to Work

While becoming part of a metropolitan area is often seen as 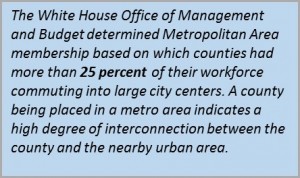 the beginning of a new era in economic development within a county, it also marks the end of another economic era. Among the 42 counties that were added to metro areas by the Office of Management and Budget in 2013, 34 had experienced a decline in the number of jobs within their county in the past decade.

The economy of new metro area counties
A good example of this trend is Floyd County in western Virginia, which became part of the Blacksburg Metropolitan Area in 2013. During the first half of the 20th century, Floyd slowly transitioned from an agriculture-based economy to a manufacturing one, and in the process the county lost over a third of its population due to the weak local economy. After 1980, Floyd’s economy began to experience another transition as the portion of its residents who worked in manufacturing declined from 40 percent to 14 percent in 2014. 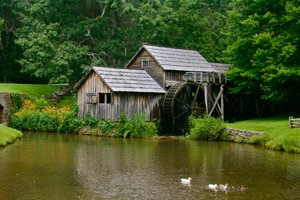 Mabry Mill in Floyd County once served as a sawmill and gristmill, and now is a tourist attraction along the Blue Ridge Parkway

Just as manufacturing began to decline in Floyd, however, the expansion of two large state universities and a regional hospital in the nearby Blacksburg Metro Area provided jobs for Floyd residents willing to make the commute. Between 1980 and 2014, Floyd slowly transformed into a bedroom community for the Blacksburg Metro area. The portion of Floyd residents who worked in the Blacksburg Metro Area more than doubled to 30 percent. Even as Floyd County’s population grew over the last decade to levels last seen in 1900, the number of jobs within the county has continued to decline.

The shift away from an economy centered on agriculture and manufacturing has been difficult for many communities, but it also has had its benefits. Farming is an unreliable business, dependent on weather and volatile commodity prices. Factories have not always provided stable jobs either. During the 1980s and 1990s, when Floyd County’s economy was heavily dependent on manufacturing, its unemployment rate often rose to over 10 percent during recessions as factories cut output. Since Floyd transitioned to being a bedroom community for Blacksburg, its unemployment rate has remained much lower in the past two recessions than neighboring non-metro counties.

The Floyd Country Store has been operating as a general store since 1910, but now also serves as a restaurant, a local music incubator and a performance space

Similarly, the shift away from a manufacturing-based economy to being a bedroom community has caused Floyd County’s median household income to decline relative to the rest of Virginia. But the poverty rate in Floyd County has also declined below the statewide rate. Among families with children, the poverty rate in Floyd is now half the statewide average, suggesting that while many of its residents have lower incomes, most are more comfortable than the state overall.

A large part of what causes many of Floyd’s residents to continue to live in the county while commuting over 30 miles to work near Blacksburg is the quality of life that Floyd offers. Besides being situated on a rural plateau along the Blue Ridge Mountains, Floyd County has a wide variety of small agribusinesses that supply local restaurants and the Floyd Farmer’s Market, as well as a large number of independently owned businesses. Because of Floyd’s many independently owned businesses, the portion of Floyd residents who work at home is nearly 10 percent, twice the statewide rate. Similarly, employment in agriculture has actually risen within the county in recent decades, while statewide the number of agricultural workers has fallen by a third since 1990.

If you step back and look at the 42 counties across the U.S. that became part of metropolitan areas in 2013, most were similar to Floyd: rural counties transitioning away from manufacturing-based economies to being bedroom communities for a nearby urban center. Though becoming part of a metropolitan area has not prevented job losses in most of these counties, being connected with a larger, more diversified metropolitan economy has typically meant more economic stability than in the past. The fact that so many of the 42 counties’ workers have chosen to remain residents while commuting long distances to work in urban areas is perhaps the best indicator of the counties’ well-being.