Virginia: The state for crazy rich Asians? Affordable housing is more scarce now than during the housing bubble

Virginia is just now seeing the first significant increase in homeownership since before the housing crisis. According to annual data from the American Community Survey, two-thirds of occupied homes in Virginia were owned in 2017 – a 1.3 percent increase over 2016. Homeownership is increasing at an even greater rate among members of Virginia’s younger generation, who are catching up following the negative impact of the recession. Young adults, defined here as those age 15 to 34, had a homeownership rate increase of 1.6 percent between 2016 and 2017, reaching 34.8 percent. The homeownership rate among those other than young adults (greater than 34 years old) was 73.7 percent – an increase of 1.0 percent.

How does young Virginian homeownership vary across the state? What underlying causes are driving changes in the homeownership rate? What does this information indicate and imply for Virginia counties and cities? This commentary aims to explore the above questions.

Figure 1: Change in Homeownership Rate from the Previous Year in Virginia, 2006-2017

Homeownership rates among young adults vary widely across the state, from a low of 9.4 percent in the Cities of Radford and Williamsburg to a high of 74 percent in New Kent County. Low young adult homeownership is present in areas with college towns as well as cities with expensive housing and where renting may be preferable. Most high young adult homeownership jurisdictions lie in exurban areas surrounding employment centers, where housing is less expensive yet commuting is reasonable. The map in Figure 4 below uses 2016, 5-year average Census data which provides a complete picture with reliable data for every jurisdiction in Virginia – not only the 32 with populations over 65,000 available in the 2017 1 year estimates. 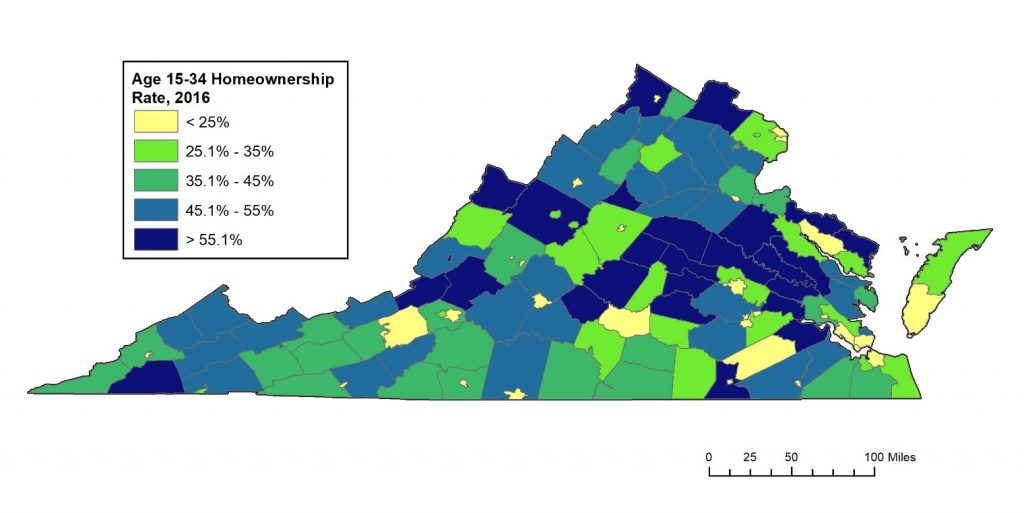 The geographic variability across the state in young adult homeownership highlights some interesting insights. Where are young adults living, and where is it economically feasible? 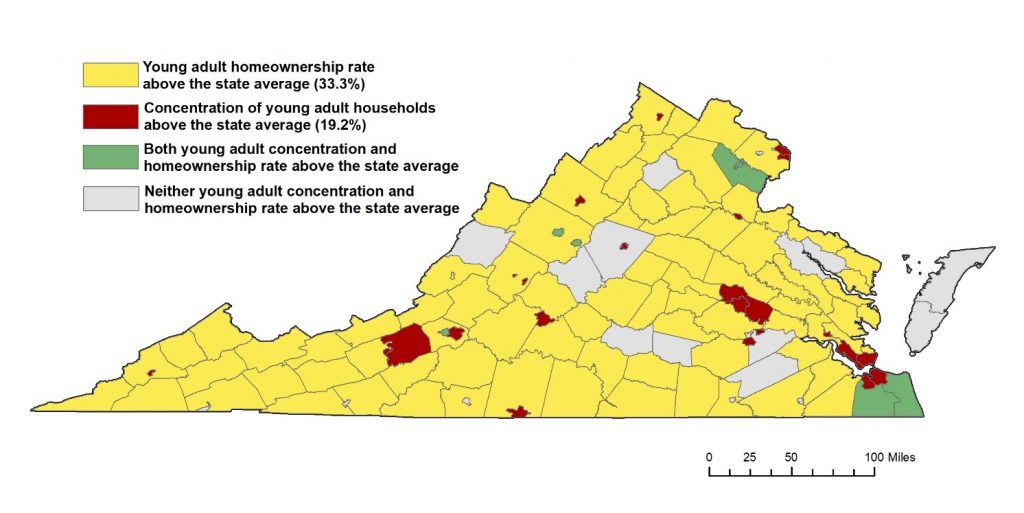 The majority of the areas with high young adult homeownership yet low concentrations of young adults are less densely populated and largely rural. The high homeownership among the fewer young adults (in the yellow areas) is likely a factor of necessity and relative affordability – rental units are sparse and homes are cheaper. The optimal conditions (in green) where young adults are living in high numbers and they are able to purchase a home are rare.

It is important to note that Henrico County, surrounding Richmond, is very close to optimal (green), with a high young adult household concentration (20 percent) but a young adult homeownership rate of 31.5 percent, which is about 1.5 percent below the state average. 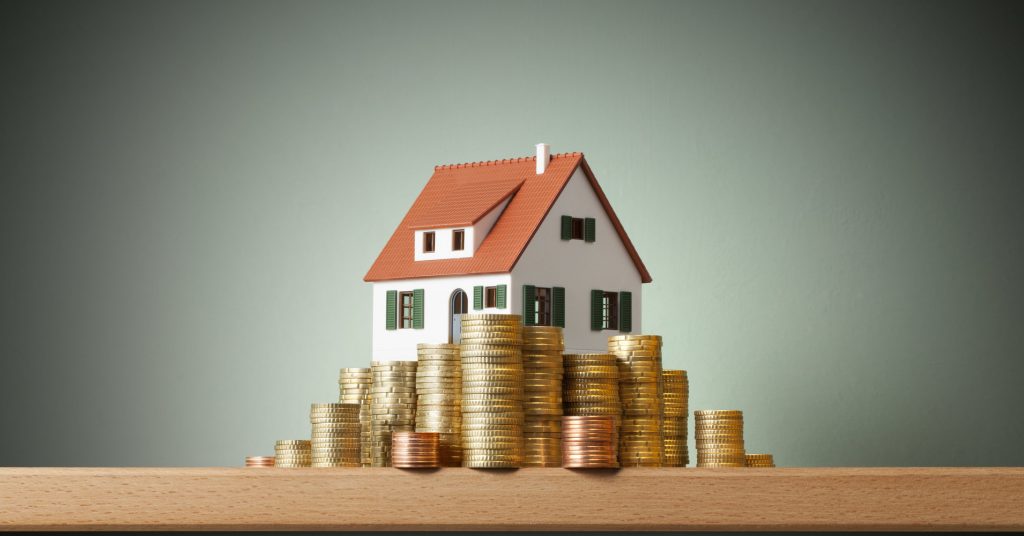 At the end of the day, homeownership is driven by the availability of affordable homes for purchase and their location relative to job markets. Economic ability is one of the primary challenges facing young potential homebuyers. Increasing education debt has reduced young adults’ likelihood of owning a home, with outstanding student loans equaling $1.53 trillion in the second quarter of 2018, according to the Federal Reserve. High rental costs also make it difficult for young adults to save for a down payment.

The household value to income ratio is an indicator of housing affordability measured by dividing the value of an owned home by the household income of its occupants. This ratio signifies the number of years of income it would take to purchase an average home. Historically, U.S. median home values have been roughly 2.5 to 3 times median income. (What price is “affordable” to a buyer with a given income depends partly on mortgage terms). In Figure 5, we see the percentage of owned homes with a household value to income ratio greater than three. As expected, relative to income, homes are less affordable near job centers such as Northern Virginia and Virginia Beach. Despite these affordability challenges, young adults are concentrating in these areas, and their homeownership rate is relatively high and rising. The choice between budget stretching or moving further outwards from the city continues. 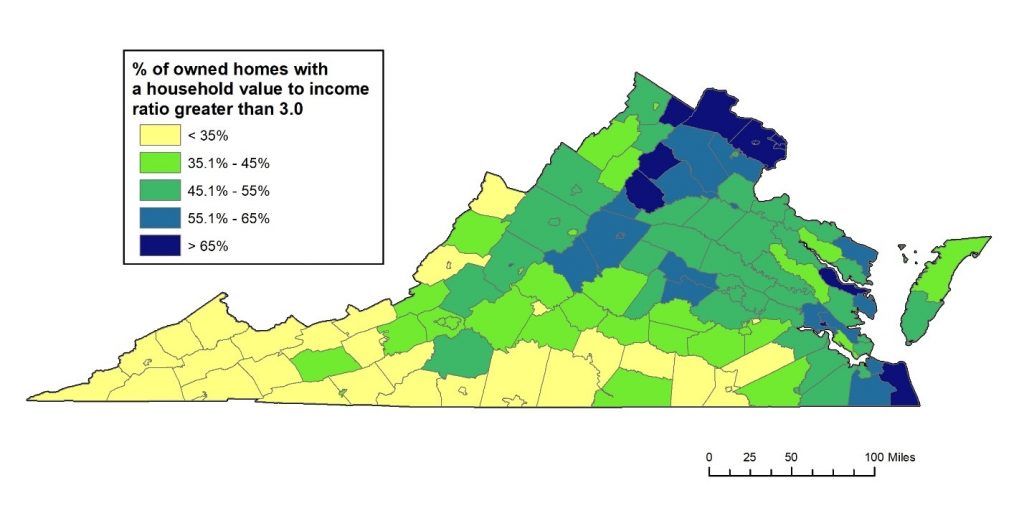