We often instinctively assume that males and females each constitute half of any given population, but the reality is that the ratio of the sexes varies by age throughout the life course. In the vast majority of societies, more boys are born than girls, females live longer than males, and the ratio of men to women declines with increasing age. In Virginia in 2017, for example, as demonstrated in the graph below, males outnumbered females in all age groups through the mid-thirties; but from the mid-thirties on, females outnumbered males, especially in the 85-and-older age group. 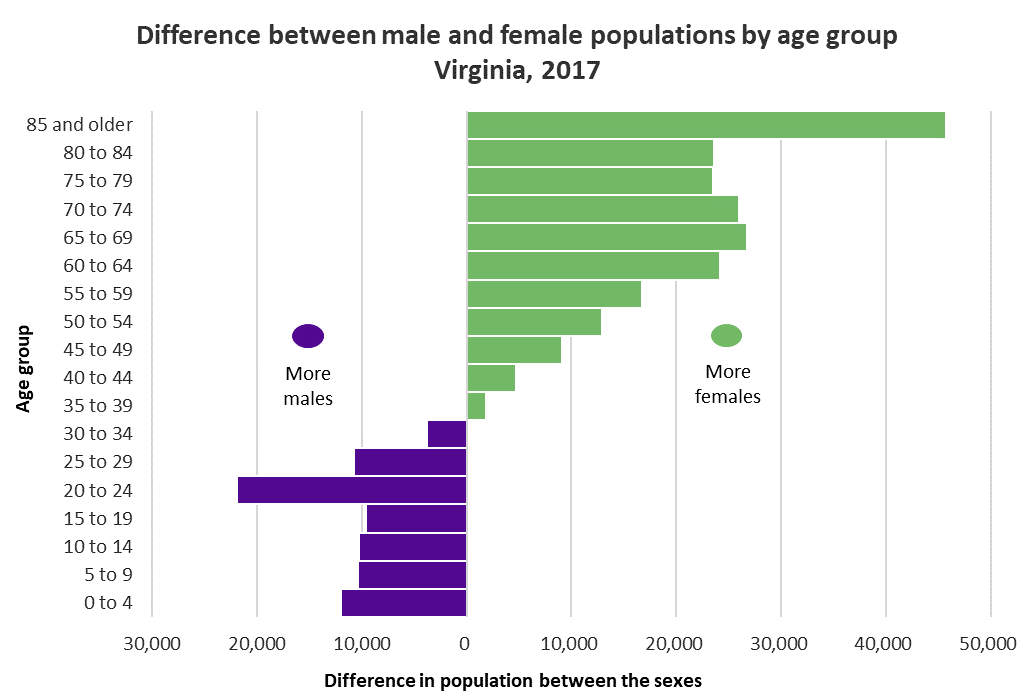 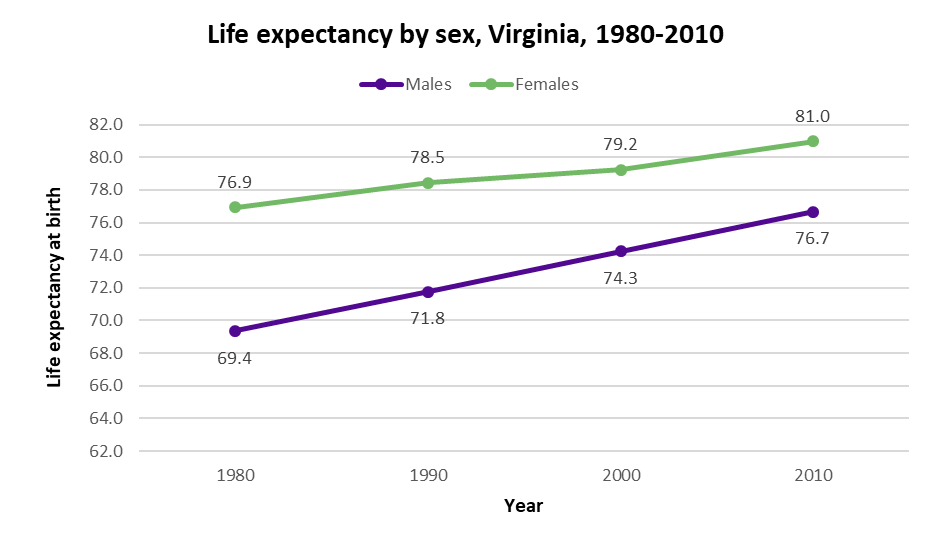 Despite a faster rate of increase in life expectancy among males during this time, it’s still the case that women outnumber men in the oldest age groups. In 2017, women comprised nearly two thirds (65%) of Virginia’s 85-and-older population, which means there were about twice as many women as men in this age group. The life expectancy gap between males and females not only results in a numerical imbalance between the two sexes within the older age groups, but it also contributes to the formation of a different set of  aging experiences, support needs, and planning considerations for each sex.

2. More women than men develop Alzheimer’s disease and other forms of dementia.

Along with greater longevity also comes higher risk for impairment associated with chronic disease. According to a 2018 Alzheimer’s Association report, for example, about one third (32%) of those age 85 and older have Alzheimer’s dementia. Although the incidence of Alzheimer’s disease is similar among males and females of the same age, advancing age is widely believed to be the largest risk factor for developing Alzheimer’s disease. Because more females than males survive to an older age, a greater number of women eventually require care for Alzheimer’s disease and die of its related complications. As the graph below shows, among those 85 and older in Virginia in 2016, there were about three times as many Alzheimer’s-related deaths reported for females (1,187) than for males (386). 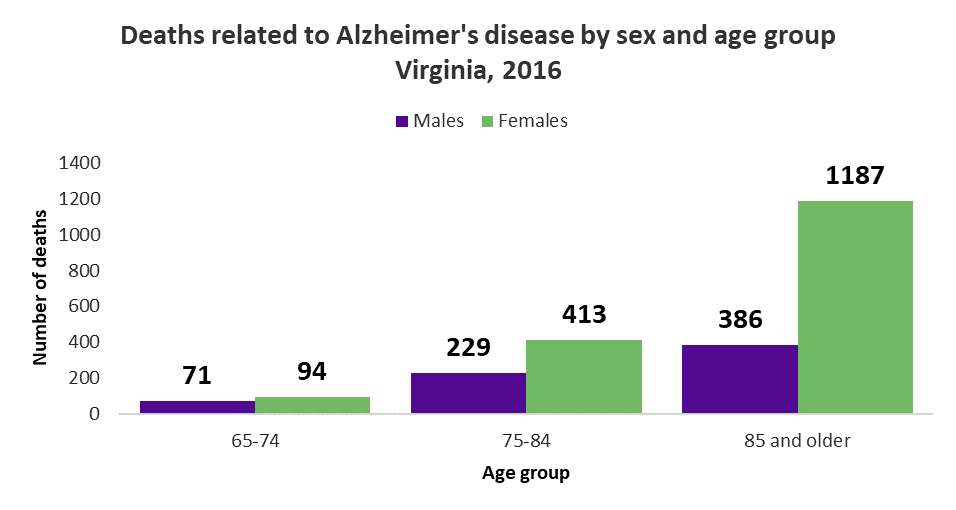 The survival “advantage” among females also means that, compared to males, greater numbers of females must negotiate disability in old age. As highlighted in red text in the table below, over half of female Virginians age 85 or older reported having ambulatory and/or independent living disabilities in 2017, with each of these disabilities affecting more than twice as many females as males.

Number (and percent) of males and females age 85 and older reporting disability, Virginia, 2017 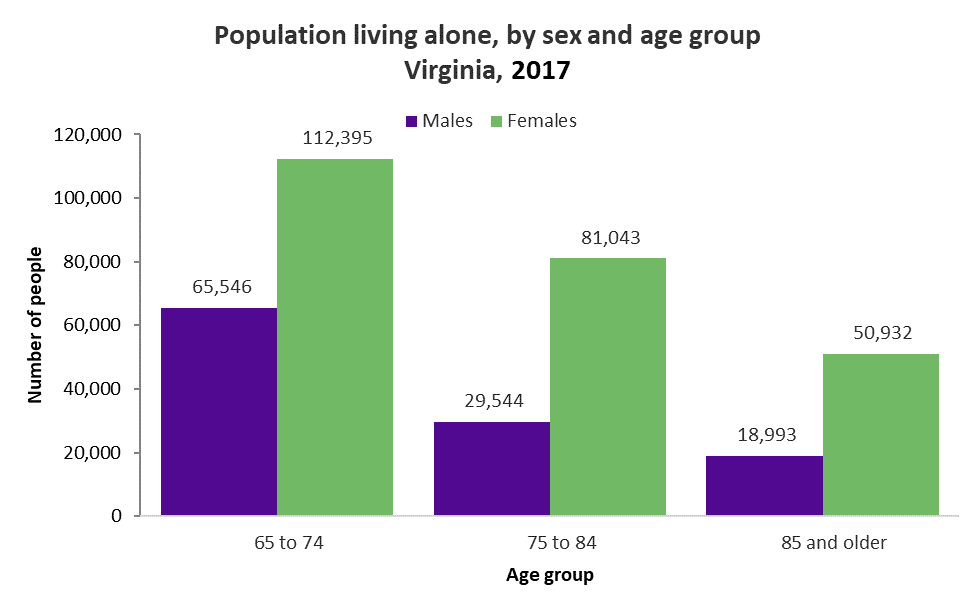 Given that more females than males face dementia and/or disability in old age and face these challenges alone without the benefit of informal care provided by a spouse, it’s not surprising that women represent the majority of those in Virginia who pay for formal, professional long-term care.

It’s also true that women tend to depend on this care for longer periods of time than men. According to research conducted by the U.S. Department of Health and Human Services (HHS), women turning 65 in 2015 to 2019 are projected to use 1.3 years of paid, long-term care services compared to just 0.7 years of use by men. Over and above that, 8% of women in this cohort are expected to require more than 5 years of paid, long-term care compared to just 3% of the men in this group.

With the annual median cost of a semi-private room in a nursing home in Virginia estimated to be $89,425, longer stays in facilities like this can become especially expensive over time. In 2010, for example, as this report quantifies, females spent 1.8 times as much as males on long-term care services in nursing care facilities, in large part due to their longer life expectancy.

All of these statistics will continue to evolve, as larger relative increases in male life expectancy will alter the dynamics within the oldest age groups. Improvements in male longevity will also likely mean that a greater number of older males may find themselves facing the same physical, social, and financial challenges that have in recent history had a disproportionate impact on women in their old age.