There is an axiom in the technology sector, known as Amara’s law, which states that the short term impact of a new technology will typically be overestimated while the long term impact is usually underestimated. This is particularly true when considering the impact the internet was expected to have on where people choose to live. During the 1990s dot-com boom, increasing access to the internet was expected to make geography matter less—with goods, services and even work becoming accessible through the internet, the differences between regions, countries, cities and rural areas were expected to shrink. Thomas Friedman’s bestseller The World is Flat popularized this idea even further. But the acceleration in job and population growth in many major U.S. cities over the past two decades has caused a number of demographers and economists to question the initial assumption that the internet would be a “great leveller”. In fact, in a digital economy, the growth in jobs and population has appeared to be more concentrated than ever in a few large metro areas. 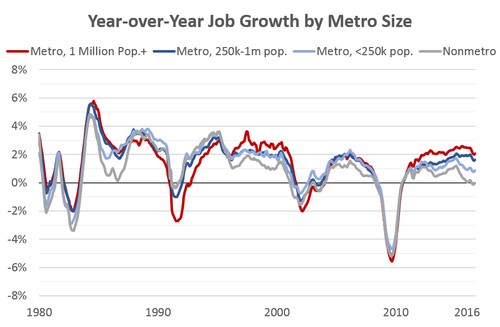 However, Census Bureau data released in December shows some signs that the internet may be entering the second stage of Amara’s law where the places Americans chose to live are becoming less connected to where their employer is based. In the last three years that Census data is available (2015-2018), the number of Americans who primarily telecommute (working from home) rose by over 1.6 million, after increasing by less than 1.5 million between 2000 and 2010. If Virginians who primarily worked at home were grouped together as an industry, it would easily be Virginia’s fastest growing industry, increasing by 43 percent since 2010. As of 2018, about 6 percent, or nearly a quarter of a million Virginians, worked from home, a little less than the share of Virginians who worked in manufacturing (7 percent). 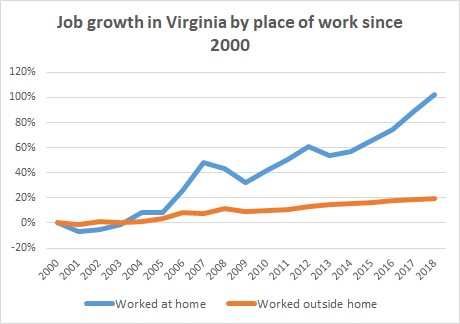 The recent acceleration in the growth of telecommuting has been helped, in part, by a record low unemployment rate, which is causing more employers to offer the option to work remotely as an amenity to keep or attract workers. Nationally, the Census Bureau estimates that a little over 5 percent of Americans primarily work at home, but the Census estimate does not include Americans who worked remotely outside their home, such as in a coworking space or a coffee shop, nor does the estimate include all Americans who split their work between the office and home. In a separate estimate, the Bureau of Labor Statistics found that a quarter of U.S. workers at least occasionally had days they worked from home. 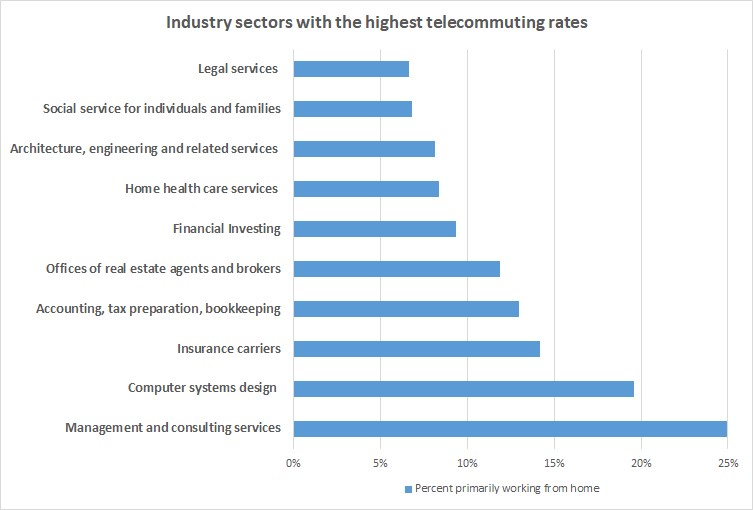 As might be expected, working from home is much less common among blue collar and many service industries than white collar industries. Within white collar industries, the share of employees who work from home varies considerably. In 2018, a quarter of workers in management and consulting primarily worked at home, as did close to a fifth of workers in computer system design (IT), while only 3 percent of workers in education and 2 percent employed in public administration worked from home. Telecommuting has developed so quickly in recent years that it is difficult to know whether working from home will also become more common in some industries with low telecommuting rates, such as education or public administration. As recently as in 2000, only 3 percent of management and consulting employees and 2 percent of IT employees worked from home.

Among Virginia’s metropolitan areas, teleworkers are disproportionately concentrated in metro areas with a large share of their workforce employed in white collar industries, such as Northern Virginia and Charlottesville. However, it is the exurban and rural counties that have the highest rates of telecommuting in Virginia despite how limited internet access remains in much of rural Virginia (in 2015 the FCC estimated that nearly two-thirds of rural Virginians were unable to receive high speed internet service). In Richmond County on Virginia’s Northern Neck, nearly 13 percent of the workforce primarily works from home. Among the ten Virginia counties with the highest rates of working from home, only Albemarle has a population larger than 75,000.

Percent of Virginians working from home in 2018 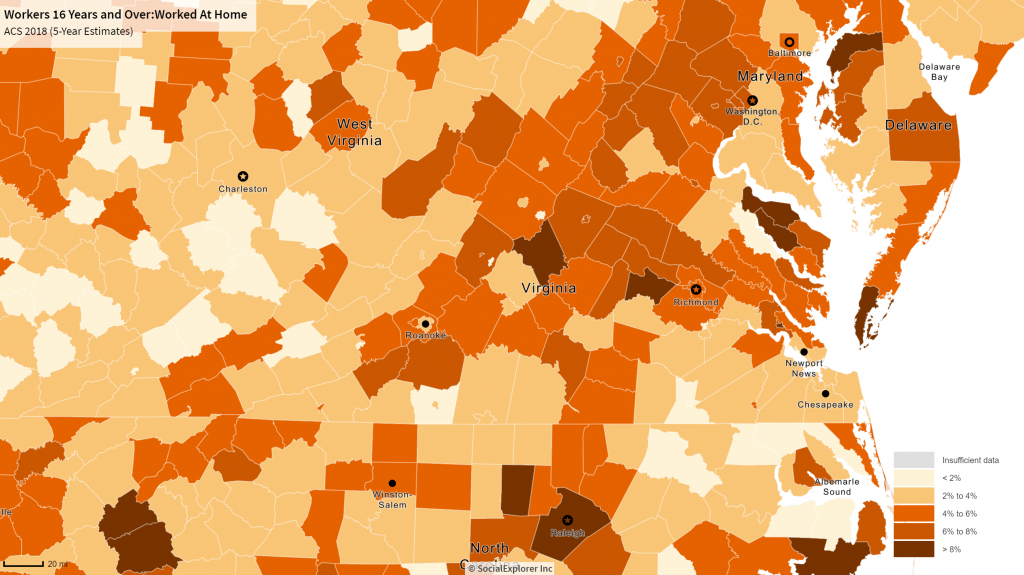 The rise in teleworking in Virginia’s rural counties has brought with it a number of benefits, such as that teleworkers have typically helped diversify rural economies since teleworkers are more likely to work in industries that are underrepresented in rural areas. Teleworkers also on average earn more than most workers who live in rural counties, helping boost their community’s overall income. Though teleworking has accounted for a third of job growth outside Virginia’s three largest metro areas since 2000, its role in rural job creation has gone mostly unnoticed. In Virginia’s non-metro counties, teleworking accounted for nearly 90 percent of job growth during the period.

Percent working from home in 2018 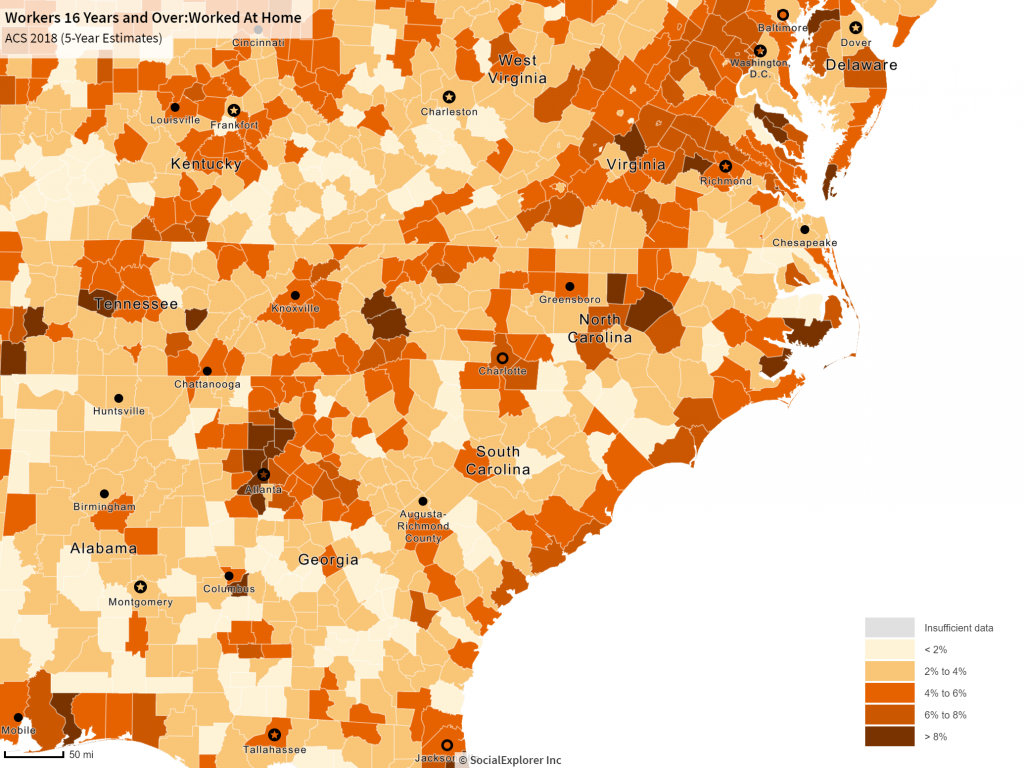 Throughout the U.S., the locations where teleworkers are most likely to live follows a similar pattern as in Virginia. In the Southeast region, metro areas that have a high share of the workforce employed in white-collar occupations also have above average rates of telecommuting, such as Atlanta and Raleigh. The highest rates of telecommuting, however, are often found outside the region’s large metro areas in counties along the Blue Ridge Mountains and Atlantic coast.

Many telecommuters, now able to live further from their central office, have moved to the counties along the Blue Ridge and the Atlantic that also attract vacationers and retirees who relocate there. The Asheville metro area in North Carolina’s Blue Ridge Mountains has the fifth highest share of workers who telecommute among U.S. metro areas. Similar to Asheville, the four metro areas with higher rates of telecommuting—including Boulder, Colorado and Kingston, New York—have large outdoor recreation industries that capitalize on local geographic features. 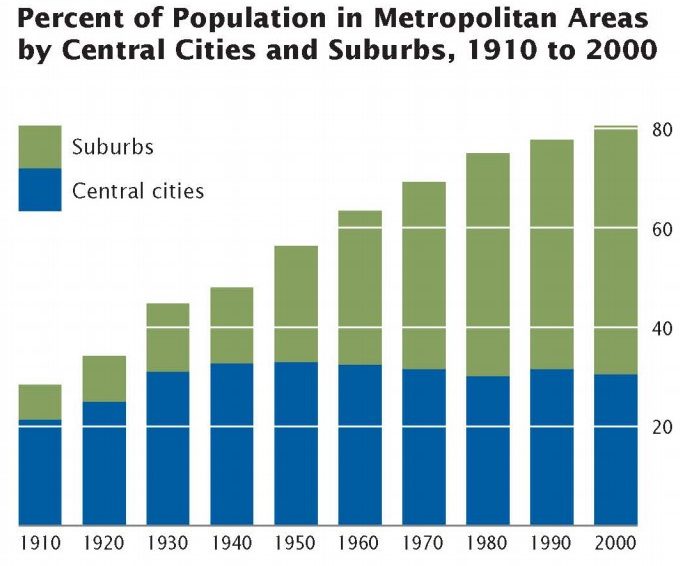 Perhaps the biggest demographic trend in the second half of the 20th century was the decision made by millions of Americans to move away from the large urban job centers to nearby suburbs and the Sunbelt states in order to find extra space, a lower cost of living and more opportunities for recreation. Telecommuting is a continuation of this trend with many teleworkers moving further away from large urban job centers. Just as postwar investment in the interstate highway system and airports supported the rapid growth of the suburbs and the Sunbelt, current public and private investments in expanding broadband access and improving transportation will give more employees the ability to work remotely and travel to their central office when necessary. While it would be bold to predict that the internet will have the same impact on where Americans live as the interstate highway system did, the demographic impact of the internet will likely grow more visible as the 2020s progress.