Last week, May 17 to be exact, marked the anniversary of the Brown v. Board of Education decision, the 1954 Supreme Court case that declared racially segregated schools “inherently unequal.” Reading an op-ed this weekend that relayed some of the benefits of racially integrated schools piqued my curiosity about the status of school segregation in Virginia.

So I looked at the data, specifically, the fall membership data available from the Virginia Department of Education, including data on the number of black students, number of white students, number of economically disadvantaged students, and number of total students in each school in the 2011-2012 school year. From these, I produced a dissimilarity index – the segregation measure I discussed in a previous post – assessing how segregated black and white students were across the elementary schools in a school division (essentially, within a locality). 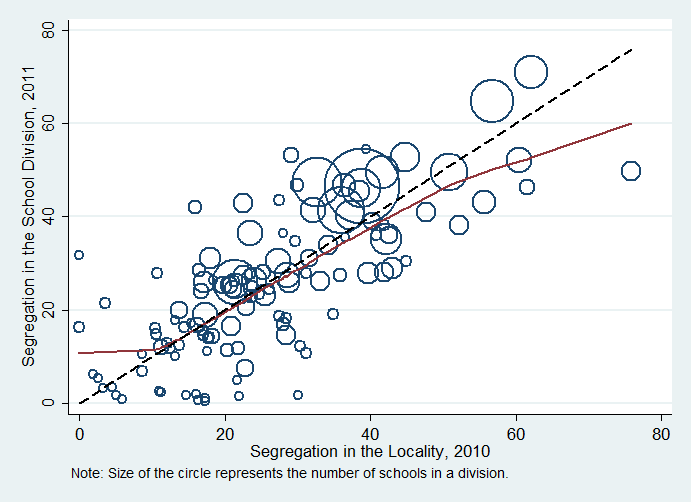 Some observations about the figure:

Many of the problems produced by racial segregation occur because racial segregation tends to concentrate poverty: in racially segregated areas, the poor are more likely to be spatially isolated within a small cluster of neighborhoods rather than spread out more widely across the locality. To see how this plays out in Virginia’s elementary schools, I also gauged economic segregation in the school divisions by looking at the distribution of economically disadvantaged students within the schools.

The two are unmistakeably related. 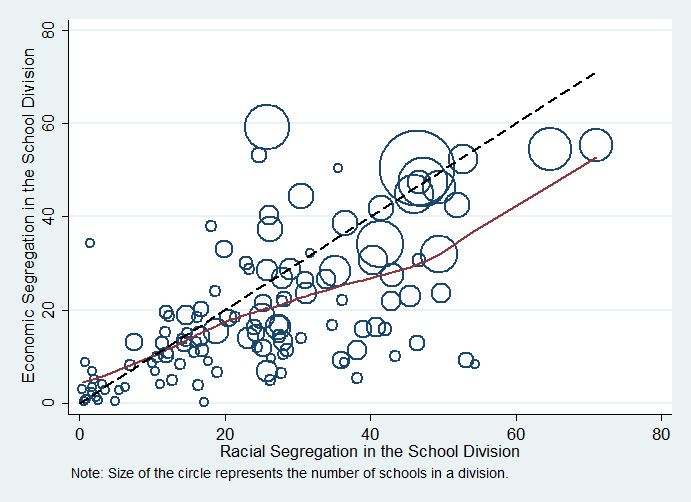 *For the statistically curious, the relationship portrayed by the solid red line is estimated with a locally weighted scatterplot smoothing regression, aka LOWESS.

Michele Claibourn is a Research Associate at the University of Virginia’s Weldon Cooper Center for Public Service where she specializes in statistical modeling and civic engagement. She’s the author of Presidential Campaigns and Presidential Accountability.