The Goldilocks problem: Enrollment trends are not being kind to Virginia’s schools

This week, the Demographics Research Group published a new Census Brief covering recent trends in Virginia’s public school enrollment. Despite the weak economy, most of Virginia’s localities have continued to grow in population during the past five years. Throughout the recession and the subsequent recovery, Virginia has consistently had more people moving in than out. Yet in many of Virginia’s localities the number of children enrolled in their schools is beginning to decline while their population continues to grow. The divergence in population and school enrollment trends is likely to be a challenge for many local governments going forward. 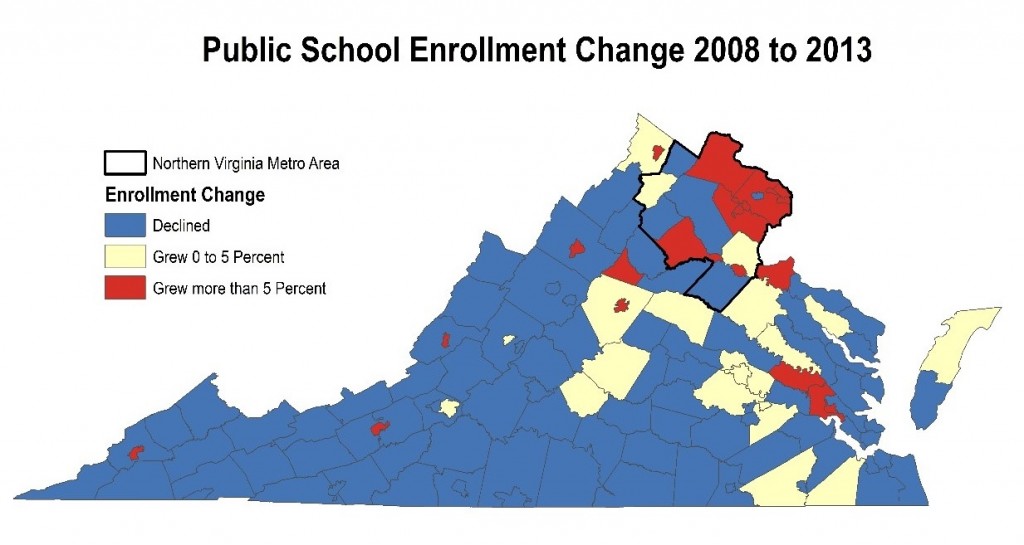 The chief reason for the different patterns in population and school enrollment is that the type of population growth which many of Virginia’s localities are experiencing is changing. Large metro areas have had the healthiest economies since the recession began, so many families have moved to where the jobs are, particularly Northern Virginia. Similarly, the rise of households with both spouses employed means that families are more likely to be attracted to large metro areas where there is a greater chance that both spouses will find a job. The result has been that more children are enrolling in schools in many of Virginia’s urban areas, while school enrollment is declining in most rural and exurban counties.

Both significant increases or decreases in school enrollment will be a challenge for school divisions. Many divisions with expanding school enrollment have already been growing for decades, which means few have extra classroom space and many are still paying off debts from previous school construction projects. Most divisions with declining enrollments have already closed and consolidated schools, and further consolidation for many of these divisions would often mean having only one school in counties that stretch 50-60 miles across. The trend of declining enrollment in rural school divisions appears even more challenging when taking into consideration that many of the schools with declining enrollment are also those most dependent on state funding. Since state funding is in large part tied to the number students in a division, many divisions face the prospect of less state funding.

Many of Virginia’s school divisions are either running out of students or running out of classroom space. What our projections indicate is that neither will likely see much relief soon.