The geography of Virginia’s presidential primary Black households earn more in the Mid-Atlantic, but there is no simple explanation why

How to modify poverty calculations for college towns 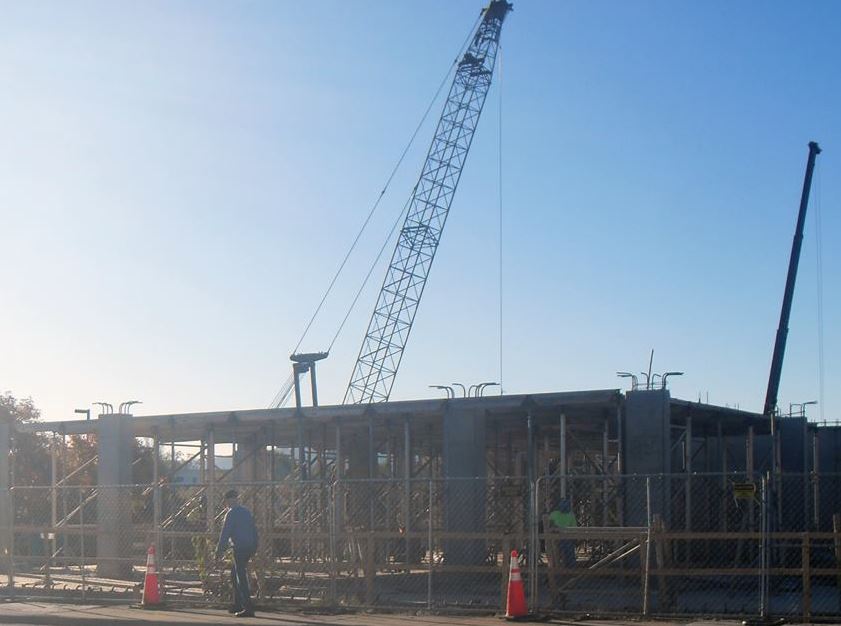 High-end off-campus student housing under construction in Charlottesville near UVA. Though a one bedroom apartment could cost $1400 a month, the residents these apartments will be marketed to may still report income levels below the poverty line.

In our latest Census Brief, Poverty and postsecondary students in college towns, we discuss why it’s important for college towns to take undergraduate and graduate students into account when looking at community poverty. While poverty estimates explicitly exclude people living in group housing—such as dorms, correctional facilities, or residential nursing homes—these calculations do include college or graduate students who live in off-campus housing. Because many post-secondary students have low incomes, they may contribute to high poverty rates in the areas where they live. As a result, we often see inflated poverty numbers in college towns.

However, it is not enough for localities to explain away high poverty rates by suggesting that they are caused only by the presence of college students. Many college towns have pervasive community poverty that is only somewhat increased by the included off-campus students. Local leaders interested in making informed decisions about combatting poverty, particularly in localities with high populations of post-secondary students, should take a closer look at how much student poverty influences the overall rate.

Poverty and postsecondary students in college towns compares “official” with “non-student” poverty rates for the ten Virginia localities with the highest postsecondary student populations. The Census Bureau, which suggests the methodology we applied in our work, has conducted a slightly more precise version of these calculations for towns across the country for an earlier time frame (2009 to 2011).

But perhaps you’d like to double check our work, use data from different years, or make the comparison for a town that didn’t make our list or the Census publication. You’re in luck: There is a straightforward way for city, town, and county officials to compare official poverty rates with non-student poverty rates using publicly-available Census Bureau data.

1. Identify the most recent American Community Survey poverty estimate for your locality.[i] One way to access this information is through American FactFinder, where you can conduct a search for the table entitled “Poverty Status in the Past 12 Months,” which is given the ID S1701. A good rule of thumb in choosing the dataset is to use the most recent dataset that spans the longest timeframe. Currently, this dataset is the 2014 ACS 5-year estimates.

In FactFinder, you will be given the choice to add or remove geographies when you navigate to the “Poverty Status in the Past 12 Months” table. Enter your city or county name in the search bar, and select the option that best matches your level of geography. While you can find information for areas as small as neighborhoods, estimates will be more reliable at the city or county level, so stick with that for now.

The specific estimate you are looking for—at least, to start—is the percent below poverty level for the full population for whom poverty status is determined. You might also be interested in knowing the estimated number of people this percentage represents. 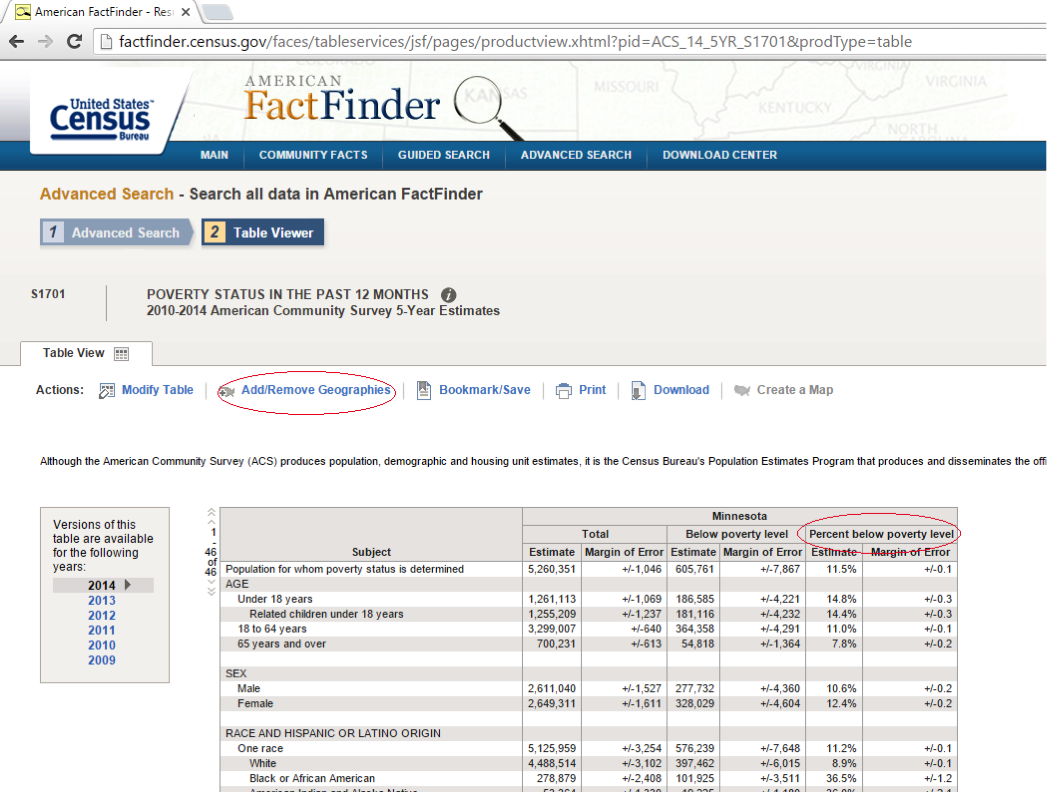 2. Find the American Community Survey data for poverty by school enrollment. This information is given by the American FactFinder table entitled “Poverty Status in the Past 12 Months by School Enrollment by Level of School for the Population 3 Years and Over” (ID B14006). This table breaks down populations into “below the poverty level” and “at or above the poverty level” for various levels of school enrollment, such as kindergarten, groups of elementary and secondary grades, not enrolled in school and, most importantly for this analysis, “enrolled in college undergraduate years” and “enrolled in graduate or professional school.” 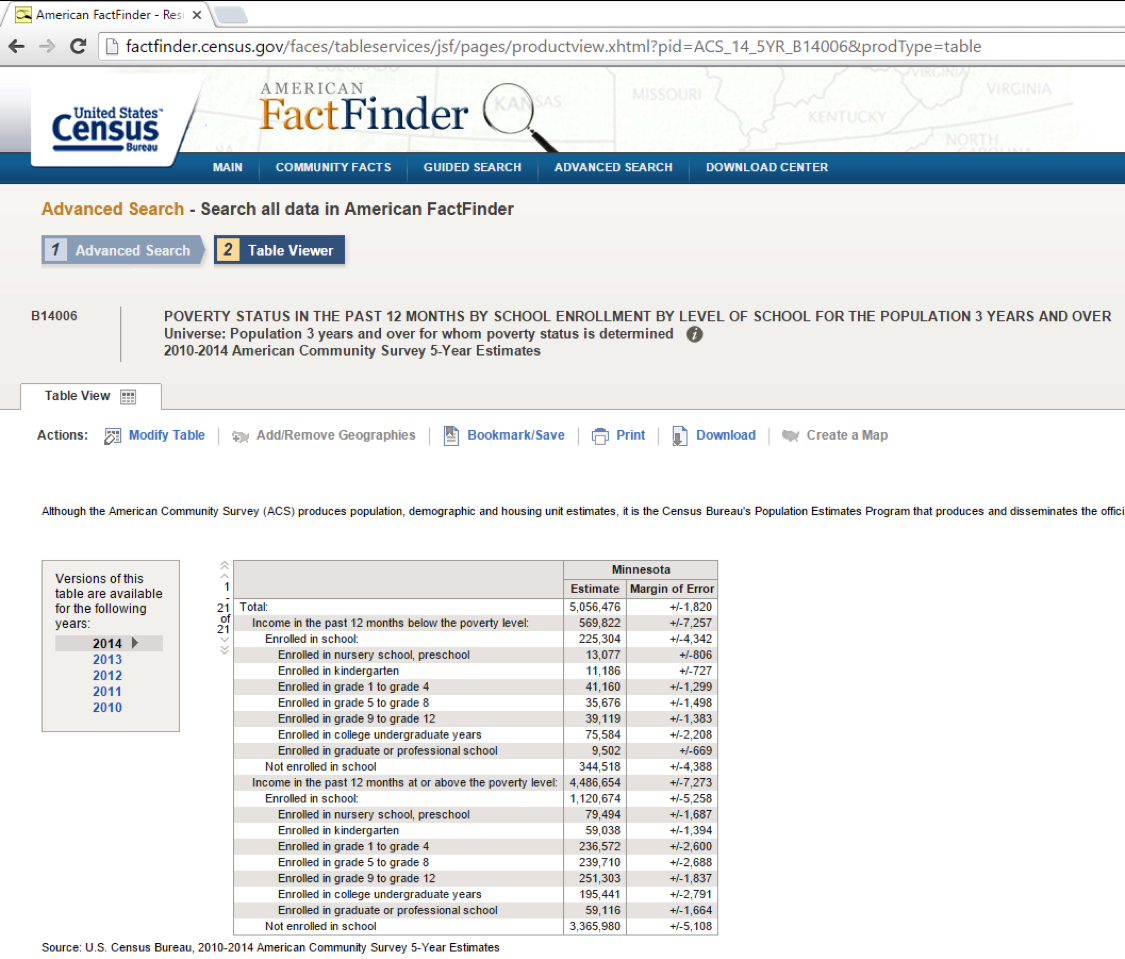 3. Create some fractions. We are interested in removing all college and graduate students from the poverty estimates, so we need to create a new underlying population of poor and non-poor residents that excludes these students (this is our new denominator) and a new estimate for number of people in poverty (this will be our numerator).

Calculate the numerator: In order to calculate the new numerator—“non-students in poverty”—you will sum the above categories but only for those listed under “Income in the past 12 months below the poverty level”. You’ll be summing six numbers to get this figure.

4. Make the comparison.  How far apart are the official and non-student poverty rates for your locality? While these calculations, alone, won’t allow you to determine if the difference is statistically significant—that is, different enough that we believe we’d get this result over and over again, no matter how many surveys we took—there is still merit to analysis by (as I once heard someone say) ocular inspection. In other words, eyeball it.

No matter what the comparison, local officials who understand the influence students have on the overall poverty rate can:

Student poverty is typically short-lived and, though inconvenient, not comparable to the burden of persistent poverty shouldered by too many residents of our towns and cities. Understanding the difference between the two measures is a first step in lightening that load, for all who bear it.

[i] Note that other Census products—namely, Small Area Income and Poverty Estimates—offer good poverty measurements for cities and counties, but the American Community Survey estimates provide the best data for comparison.