Why are Black households wealthier in Virginia? National population projections: Growing but slowing 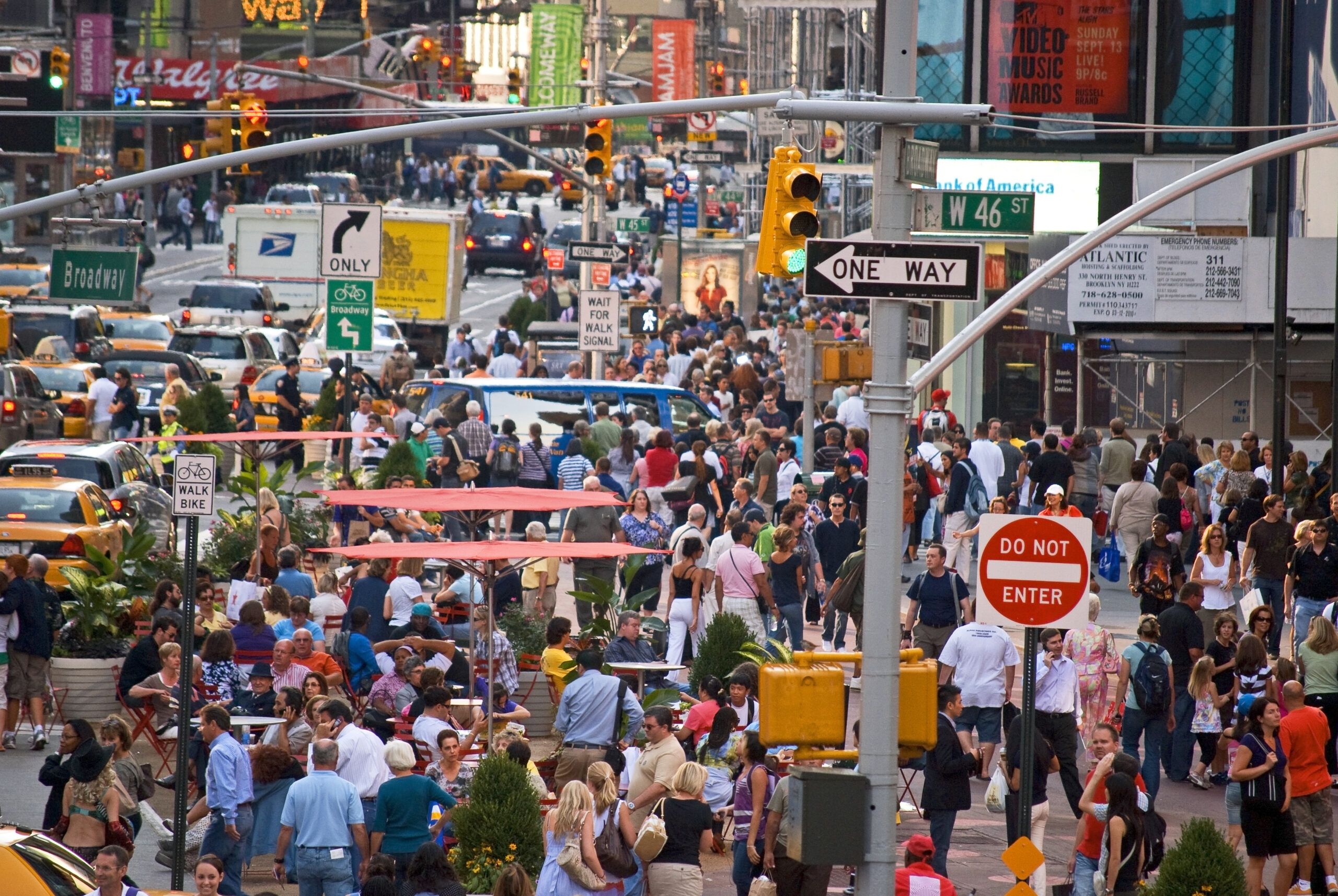 Year after year, some of the nation’s most dynamic cities are also the nation’s biggest losers when it comes to migrants. Yet rather than waste away, they continue to boom. This widely misunderstood paradox leads to some interesting articles every time the Census Bureau releases a new round of county population and migration estimates.

New York City is the prime example, as it is for most urban phenomena in the U.S. Four of New York’s five boroughs – all but Staten Island – were among the eight counties with the biggest losses in net domestic migration last year. They’re joined on that list by Cook County, IL (Chicago), Los Angeles County, CA, Miami-Dade County, FL (Miami), and Fairfax County, VA (urban county outside DC with the second highest median income in the country).

The conclusion suggested by domestic migration numbers is that New York is dying as its residents abandon ship, dragging down statewide migration numbers with it. New Yorkers would be right to question such pronouncements in the face of their skyrocketing rents, though. The city is as crowded and economically powerful as ever. Its population continues to climb despite an astronomical cost of living that suggests even more people would live there if they could. From 2010 to 2015, the Census Bureau estimates that New York City’s population increased by over 375,000. This is despite the fact that it had a net loss of over 400,000 migrants to other parts of the country. The other four counties listed above are in a similar situation, adding a combined 650,000 residents even as they experienced a net loss of 600,000 to domestic migration. What gives? Outside of major urban centers, domestic migration numbers are generally a pretty good indicator of whether a county’s population is growing or shrinking. 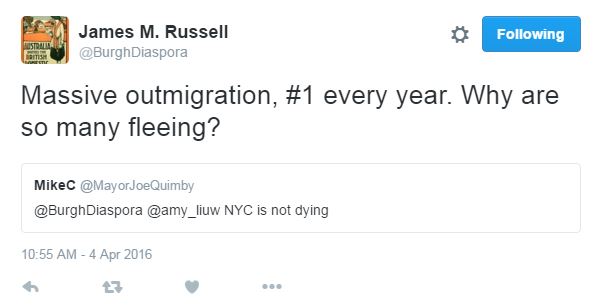 There are two parts to the answer.

The first answer is simple and readily available. Big cities are gateways for international immigrants, who crowd into apartment blocks in search of economic opportunity before eventually moving elsewhere. This explanation accounts for a little more than half the gap in the Census’ estimates for New York and the other four counties mentioned above. But even if international migration came to a halt, these cities would likely still be gaining population – or at least holding steady – while losing domestic migrants. In many other urban areas where international immigration is less relevant, including Cook County, IL (Chicago), Shelby County, TN (Memphis), and Milwaukee County, WI, the same phenomenon is happening: massing domestic out-migration coupled with modest population growth. So again, what gives?

This brings us to the second and, I would argue, more important answer: this cycle is part of the nature of cities in the 21st century. The additional population is being made up by something called “natural increase.” Natural increase simply means that there are more births than deaths in a given location, thus increasing the population. Natural increase in New York and other cities is due to the age structure of those cities: 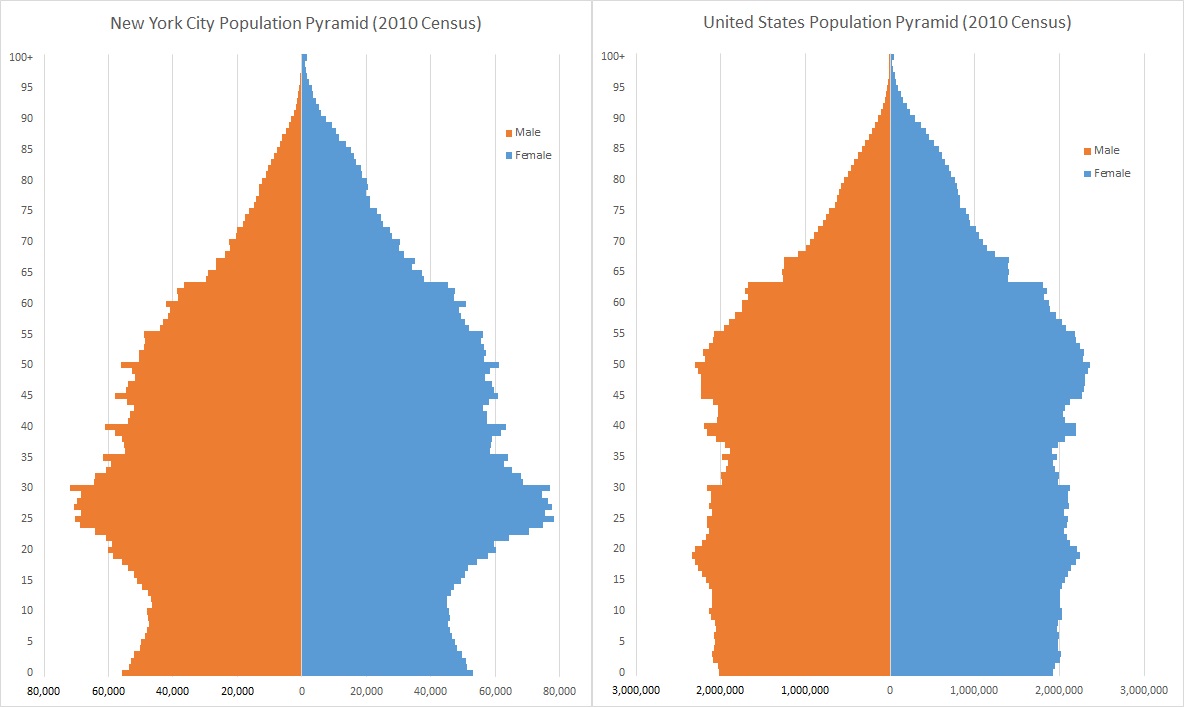 New York is a young city compared to the nation as a whole. Like most cities, it has a disproportionate share of young adults in their 20’s and early 30’s. Young adults are important in demographics for two reasons. First is what they don’t do: die. A population of 20-somethings will have far fewer deaths in any given year than a population of 60-somethings. Second is what they do: have babies. Women between the ages of 20 and 35 are in their prime childbearing years. Unsurprisingly, places that have a lot of women in their prime childbearing years tend to have a lot of births as well.

Occasionally an article will mention natural increase, with a reference to New York City’s population being especially young. But this isn’t an incidental fact about New York City, nor does it suggest that, at some point, all these New Yorkers will get old. Here is where it becomes important to understand how migration and natural increase are related. When it comes to domestic migration, how old the migrants are matters a lot. Like most central cities and economically successful metro areas, New York’s age structure looks the way it does because the city attracts younger migrants and sheds older ones. Young people follow economic opportunity, which is mostly located in urban areas. They also tend increasingly to gravitate towards the urban centers of metro areas. International immigrants are no different: they tend to be young adults following economic opportunity and, while immigrant families with children are more tolerant of dense urban areas than native born families, they still follow roughly the same migration cycle.

This chart shows the change in population for each age cohort in NYC from 2000 to 2010, broken down by age group. What this means is that there were roughly 30,000 more native-born (and 30,000 more foreign born) 25 year-olds in New York City in 2010 than there were 15 year-olds in 2000. That  means that somewhere in those ten years, that many people migrated in. Deaths account for a certain percentage of the losses in each group, but they don’t become significant enough to overshadow migration until you get into the age groups over 60. 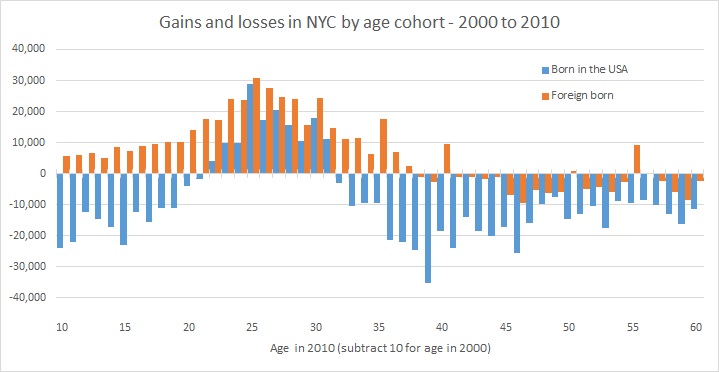 The Circle of Life

While many people do live and die in the same place they were born, many do not. The movements of those who do not are remarkably predictable, though parts of the cycle may become more or less exaggerated with economic and social changes. The picture we get from the chart above is of a city that attracts young people in their 20’s, then loses them (and their newborn children) as parents get older. This is actually a very common pattern, visible in almost every urban area in the country that isn’t suffering from chronic economic stagnation.

Young adults with no children stand to benefit most from the advantages of denser urban areas while being least susceptible to the downsides of those areas. This has been true of every recent generation of American youth, but has become especially true today.

As they get older and have children, parents remain tied to the economic benefits of the city, but begin to move towards the fringes of the metropolitan area in search of breathing room, safety, and better schools for their children. Others move to different metro areas where the same benefits are more accessible. Thus this effect exists for Manhattan in relation to its suburbs, but also for the New York metro as a whole in relation to other metro areas. Once the children are grown and the retirement accounts are tapped, some older adults may flirt with the city again, but many more decide to move even further out. They are most likely to find beautiful, low cost rural areas within an hour or two of a major city.

The resulting effect on migration numbers for central cities is illustrated below:

While domestic migration is still a good indicator of demand and growth in most counties, it’s less helpful in counties that specialize in a particular age group. Dense cities with limited ability to grow may attract young migrants, causing them to have high natural increase, which in turn pushes out older migrants, lowering the city’s death rate. Conversely, many rural and exurban counties that have become retirement havens are experiencing the opposite effect. Loss of (and inability to gain back) a young adult population has left them with chronically low birth rates and an aging population. This results in rapid natural decrease and population loss, which is then offset by a constant influx of older adults and retirees taking advantage of the low cost of living and slow pace of life. But more on that in a future post.