How accurate are population projections? 1 in 5 Virginians will be over 65 years by 2030

Despite slowing growth rate, Virginia is projected to be the 10th largest state by 2040

Latest population projections show that Virginia will continue to grow steadily over time, and be home to more than 10 million people by 2040. The statewide growth rate is starting to slow down from 13% over 2000-2010 to a little over 9% between 2010-2020, which is consistent with trends observed at the national level. Comparing projections across 50 states shows that Virginia is still poised to become the 10th most populous state in the country by 2040.

These population projections for the 133 cities and counties across the commonwealth were developed for 2020, 2030, and 2040. Along with the population totals, breakdown by selected demographics characteristics were projected at the state and locality levels, including age (18 age-groups at 5-year intervals: 0-4, 5-9, 10-14 … 80-84, and 85+), sex, race and ethnicity (Non-Hispanic White, Non-Hispanic Black, Non-Hispanic Asian, Non-Hispanic Other, and Hispanics).

From the total population projections we see that growth rates fluctuate over the decades. The 2000’s were a decade of fast growth with nearly 50 localities growing above 10%. But over 2010-2020 the slowdown is evident as only half as many (only 24 localities) have similar growth rates. The following decade is expected to see some recovery across localities, but by 2040, there may be very few fast-growing cities and counties remaining. In contrast, close to 50 localities are projected to see a decline. 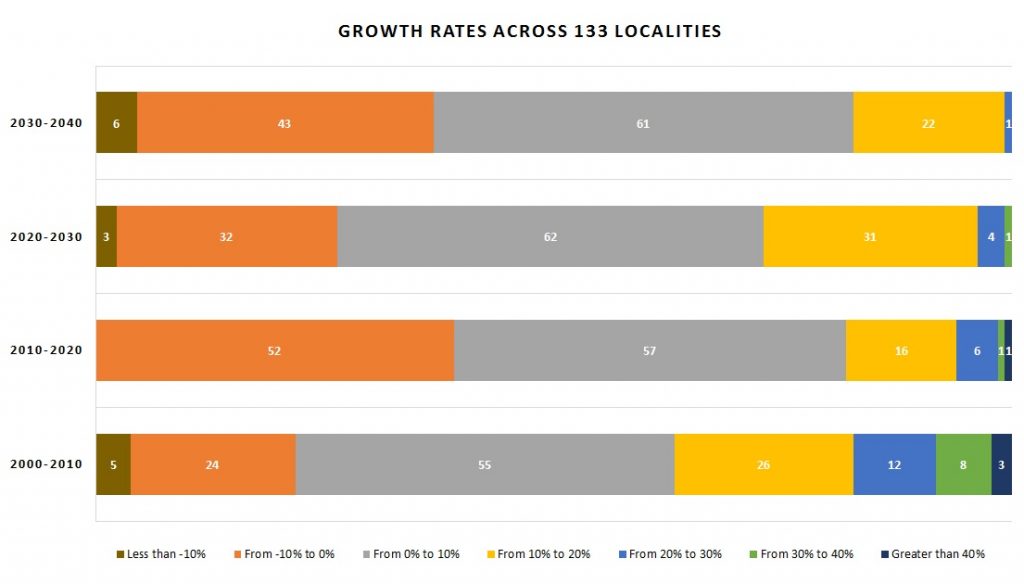 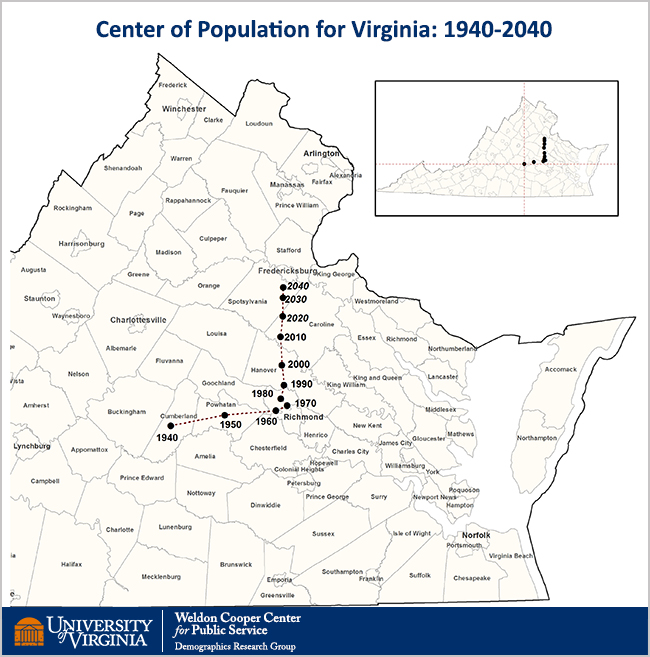 This geographic pattern is also reflected in the rural-urban divide within the Commonwealth. Rural communities in the non-metro areas are expected to

experience almost no population growth during the projected time period; while the urban population centers, especially in Virginia’s three largest metropolitan areas: Northern Virginia, Richmond and Hampton Roads are projected to continue growing. Most of the growth in Virginia overall can be attributed to more people moving into the commonwealth than moving out, and rapid growth within the older cohorts.

Since Virginia is growing both bigger and older, the next post will delve deeper into the age distribution that will unfold over the upcoming decades. To see how the projections for the different localities were developed, please visit our Virginia Population Projections webpage.

While projections are our best instrument to prepare for an unknown future, there is always some degree of uncertainty associated with them as discussed in an earlier blog on “How accurate are population projections?”