Keeping a “cool head” about Amazon in Virginia

After a lengthy and high-profile crusade, Amazon has chosen to split its second headquarters (HQ2) between the Long Island City neighborhood of Queens in New York City and Crystal City (rebranded as “National Landing”) in Arlington, Virginia. The Seattle-based Amazon could get more than $2 billion in tax breaks and other incentives as part of the deal to open up two new offices with more than 25,000 new jobs at each location. As one of the largest economic development investments in U.S. history, this is a spectacular deal for Virginia—promising $2.5 billion in capital investments and $3.2 billion in net tax revenue over 20 years, plus thousands of jobs with an average pay of $150,000. However, many are predicting an outsized effect (both positive and negative) on regional economics, housing markets, and infrastructure.  There are multiple reasons why Amazon’s impact on the Commonwealth and the Washington region may not be as extravagant as many are prognosticating.

First, let’s look a little closer at the details and see why Virginia acquired a comparatively fantastic deal. Virginia is providing Amazon with performance-based direct incentives of $573 million based on 25,000 jobs created with an average wage of over $150,000. While this is considerable, all the incentives Amazon receives are contingent on job creation over the coming years. Virginia structured the deal to ensure that it is cash-flow positive for the state budget. Virginia makes the first incentive payment five years from now — long after Amazon begins hiring and generating tax revenue. By comparison, New York is delivering nearly three times what Virginia offered – $1.525 billion – for a similar commitment to investment in new jobs. This is still a fraction of what other states unsuccessfully offered – Maryland and New Jersey put forward $8.5 billion and $7 billion, respectively.

So, why Virginia? Most of Virginia’s pitch wasn’t by way of grants or tax credits, but was through promised investments in infrastructure and education that will be around even if Amazon disappeared tomorrow. Virginia will spend up to $295 million on transportation projects, including upgrades to the Metro system and a connector bridge from Crystal City to National Airport. Virginia also paired its incentive deal with an announcement to spend up to $1.1 billion over 20 years to expand technical education at the state’s community colleges and universities. This includes construction of a nearly $1 billion Virginia Tech graduate campus focused on innovation, which will be built near the new Amazon headquarters and will provide hundreds of qualified high-tech workers annually. Many of these investments were already in the pipeline, or the state was committed to making them with or without Amazon.

Existing talent and Virginia’s willingness to invest in future talent were the most important drivers in Amazon’s choice of Arlington. Both Virginia and Amazon said the qualities that make Arlington an ideal location for HQ2 were in place before the agreement: the availability of a highly educated workforce, a diverse population, vibrant city life, and good public transportation. These factors are all likely to attract the young, upscale tech professionals who are Amazon’s most valuable resource. In other words, Amazon needed Arlington more than Arlington needed Amazon.

No Need to Overstate the Impacts:

The Amazon entry to the regional and state economy may be noteworthy, but its immediate impact is relatively insignificant in context. According to a memorandum of understanding, Amazon expects to hire 400 people in 2019 and 1,180 in 2020. By 2030, it expects to create a minimum of 25,000 jobs and potentially a total of 37,850 by 2034, which is the equivalent of about three-quarters of a percentage point of all jobs in the Washington Metropolitan region. In recent years, the Washington region grew by about 50,000 jobs annually, which is equivalent to about two Amazons, according to numbers from the U.S. Bureau of Labor Statistics. The gradual hiring by Amazon ensures that the Washington region won’t see a large shock to its labor market. 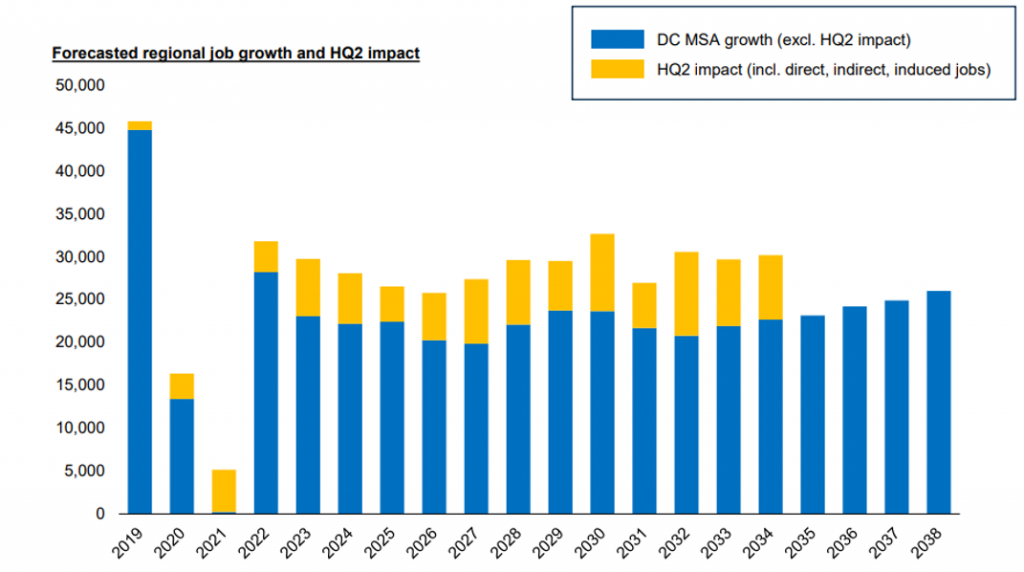 Regardless of Amazon’s entry, the region is on track to continue growing. According to the Metropolitan Washington Council of Governments, a projected 1.5 million people will move to the area by 2045, an estimate conceived long before Amazon’s search began. In addition, Arlington already has one of the most tech talented workforces in the U.S. and many of Amazon’s new workers will be hired from that pool of talent instead of from outside the region. HQ2 will still likely intensify population growth over time, but the gradual nature of the growth and advance notice will ideally allow for additional infrastructure investments to mitigate adverse effects.

Undeniably, the addition of such a large company with thousands of workers to a small area such as Crystal City (aka National Landing) will cause some traffic headaches. However, these neighborhoods and the region overall are likely to struggle with this issue, regardless of Amazon.

The state, Arlington County, and the City of Alexandria will spend hundreds of millions of dollars building out transportation infrastructure serving the area. Many of these improvements were already included in long-range plans, now serving Amazon’s needs but also benefiting the Arlington community. The Amazon deal may also serve as a catalyst to get the projects done sooner.  Coinciding with the type of campus and workforce that Amazon attracts, Arlington projects that 77% of Amazon’s workers will walk, bike, car-share or take mass transit to work. Commuter traffic further out from Arlington where infrastructure improvements are not a part of the deal, may not increase much relatively due to these expected commuting patterns. 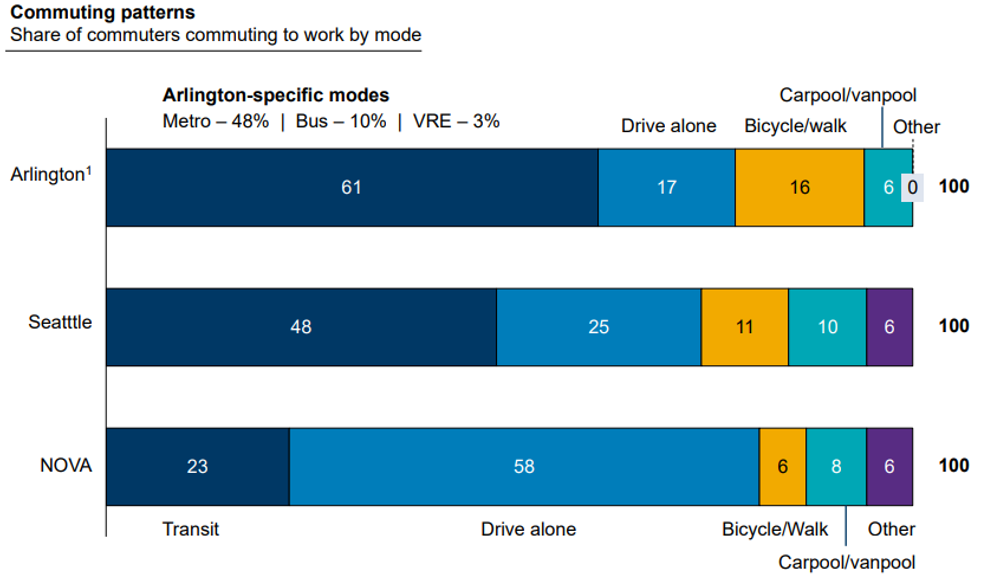 For years, the Northern Virginia region has been plagued by a low housing supply, rapid price appreciation, and a highly competitive market. Arlington’s median home values reached $542,500 in October of this year. There are substantiated concerns that the housing affordability challenges faced by many low- and moderate- income residents will only be worsened by Amazon’s arrival. While an influx of highly paid tech workers will certainly have some effect on the housing market, Amazon’s impact will be gradual and over time, rather than immediate.

However, one change that is expected to happen immediately is an increase in renting as people become acquainted with the area. A year or so later, there will likely be a greater demand for home purchasing and continued upward pricing pressures. The Virginia Economic Development Partnership (VEDP) projects that the average rent in 2026 will be between $2,216 and $2,233 per month. Amazon is expected to add less than $110 to that monthly number. Local officials reported that the area could see a short-term increase of 4 to 6 percent in the housing rental market – similar to what it has experienced in recent years. 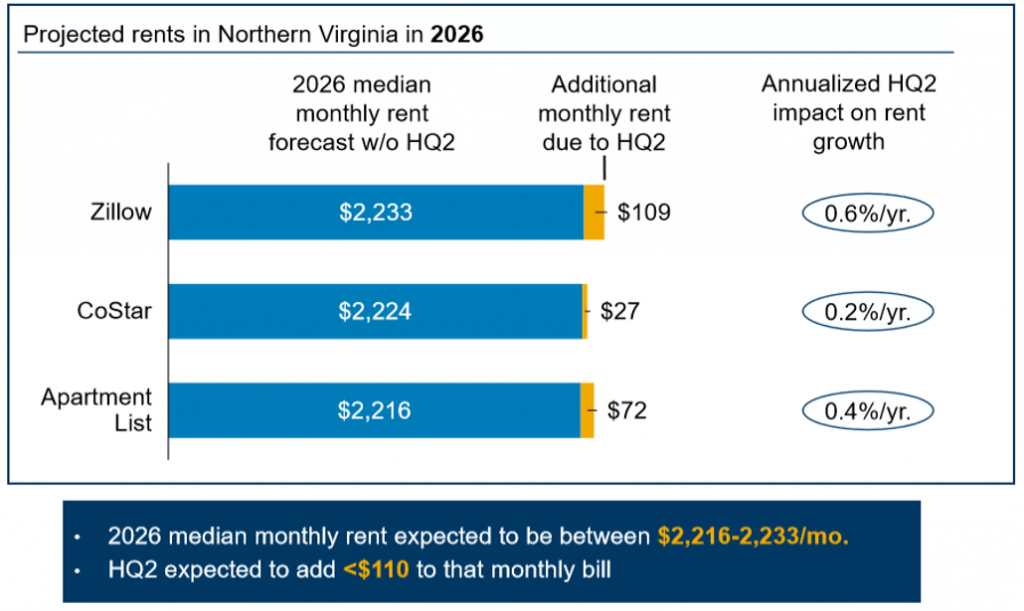 Others have alluded to the extreme housing impacts that Amazon and other tech companies have had on Seattle and are concerned that the community that houses the new headquarters will suffer similar impacts. However, the Washington region housing market is much larger and robust and is expanding rapidly with expected increases in property values even without Amazon – dissimilar from Seattle’s situation.

The lack of affordable housing is a problem that existed before Amazon’s announcement and both Arlington and Alexandria have made affordable and workforce housing a priority in the past. Amazon’s expansion will likely serve as a catalyst for continued investment. For example, the two localities have committed to allocate a portion of the new revenue from Amazon to affordable housing projects – enough to support the development of more than 1,000 affordable units.

Another step that local governments can take to help mitigate the expected price increases over the next decade is to allow for denser development in certain corridors. One of the things that makes housing so expensive in the region is opposition to zoning and ordinance changes that would allow for more housing units to become available in certain key areas.

Amazon’s selection for its second headquarters underscores how Northern Virginia has distinguished itself as not solely a federal government accessory, but a technology capital.

In choosing such large, developed metropolitan regions, the company ultimately chose the places that could absorb Amazon easily, not the places Amazon could reinvent or rejuvenate. Virginia is getting a cash-flow positive deal with high paying jobs, new tax revenue, and a renewed brand as technology capital. The courtship has also initiated a large investment in higher education and transit improvements that will serve the community well regardless of whether Amazon is headquartered there or not. Amazon made a good business decision and Virginia got a good deal. 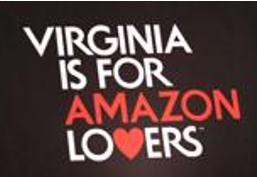