Out-migration from Virginia continues for the fifth consecutive year, pushing population growth below national levels Power and Money: Why the Census is Important 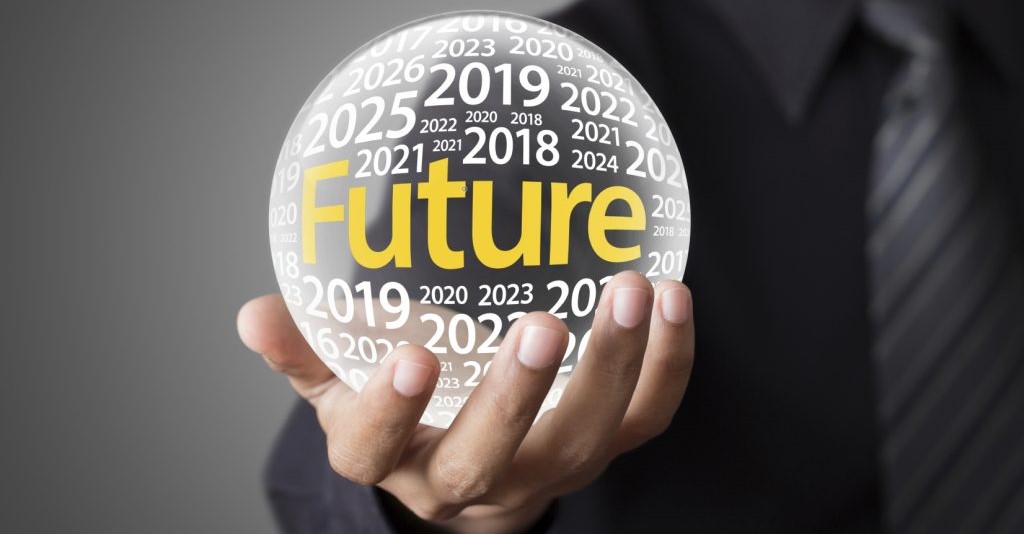 Our recently released National Projections for all 50 states and the District of Columbia updated the total population, as well as population by age and sex, for 2020, 2030, and 2040, to reflect the effect of the latest demographic trends on future population. Over the projected time period, the country is expected to grow at a slower rate, with the national total in 2040 reaching 379 million.

The top-10 largest states are projected to remain the same across the decades since 2010, but their relative ranks may vary with southern states like Georgia and North Carolina slowly climbing up the ladder over time (as shown in the table below). California, Texas, Florida and New York continue to dominate the population size charts, with more than a third of the future U.S. population residing in one of these four large states.

While most states are expected to see population growth in the decades to come, some are projected to lose their population between 2030 and 2040. Notably, Illinois, Vermont, and West Virginia may see their population decrease consistently from 2010 onwards. A shrinking population in the next 20 years is largely driven by population aging. 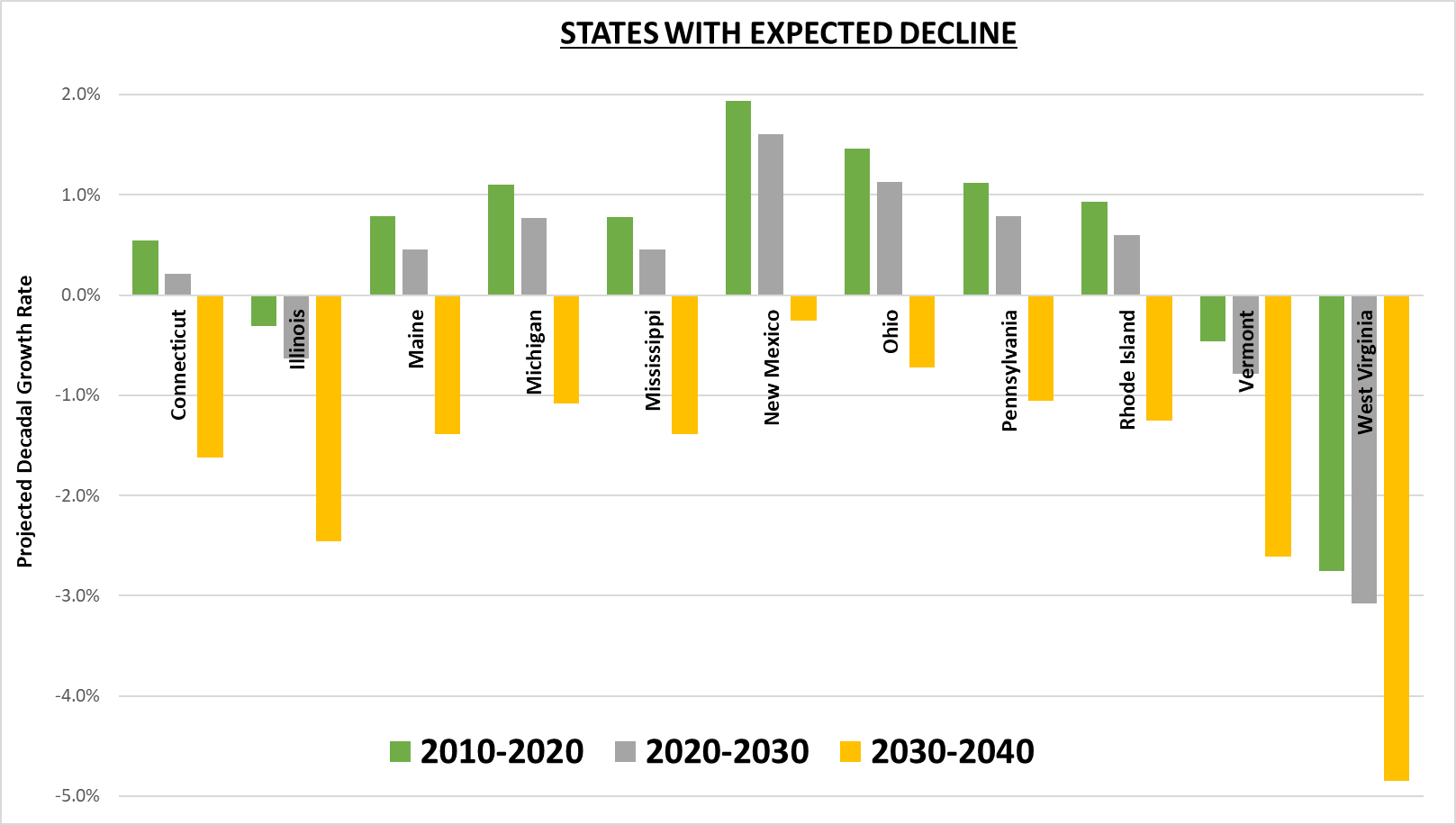 The 1990’s were a period of high immigration, accompanied by births in these young immigrant families, which meant the population had a younger age-profile. However, over time, with declining birth rates, reduced immigration, and the large baby-boomer cohort growing older, the overall population’s age distribution is bound to reflect this aging effect. Nearly 54 million Americans will be over the age of 65 by 2020, of whom more than 6 million will be 85 plus. The national dependency ratio is projected to slowly tick up from 52% in 2010 to 64% in 2040. A quarter of the population in Maine, Vermont, and New Hampshire is expected to be over age 65 from 2030 onwards, with Florida and West Virginia following close behind. 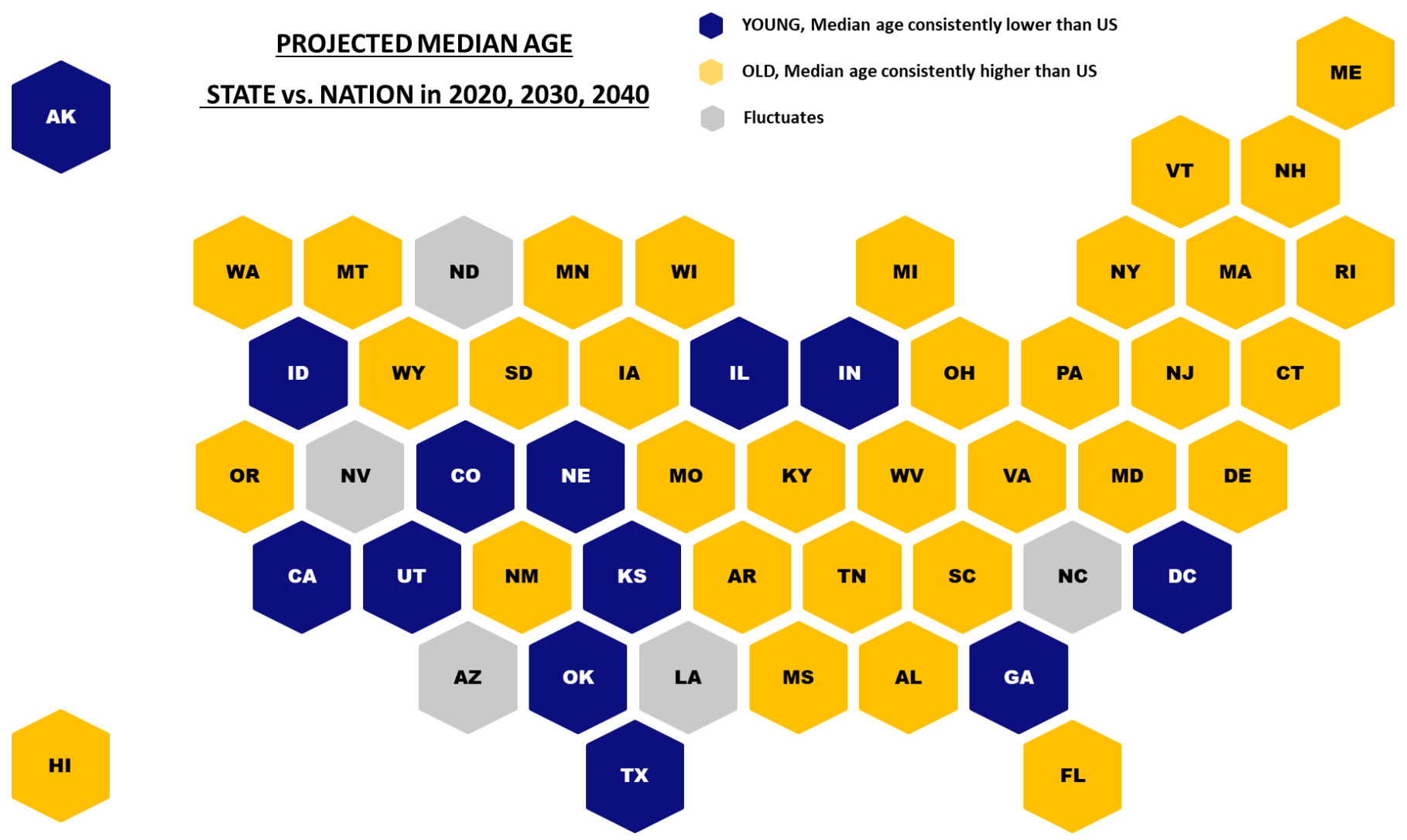 In 2040, the national median age is expected to be 38.6 years, implying that nearly half the country’s population will be in their forties and older. Comparing each state’s age profile (tile map) shows that only 13 states have a median age that is consistently lower than the national median age over the next 2 decades. Maine continues to have the highest median age while Utah remains the lowest.

For more details on how these numbers were developed, and to download the data directly, please visit our National Population Projections webpage.