Since 2010, household incomes have risen the most in rural Virginia Talent in Virginia: Where is it coming from and where is it going?

Over the past three decades, the level of educational attainment has increased in the U.S. labor force. Between 1992 and 2016, the share of the people with a bachelor’s degree has increased from 18 percent to 25 percent, and those with an advanced degree-including master’s, professional, and doctoral degrees-has increased from 9 to 14 percent. In 2016, two-thirds of the labor force had at least some college experience. Along with the growth in higher educational attainment, the number of occupations requiring college degrees also surged. According to the Bureau of Labor Statistics’ list of the 30 fastest-growing occupations, 18 of those require more than a high school diploma.

Percentage of Labor Workforce by Educational Attainment, 25 years and over, 1992-2016 Annual Averages 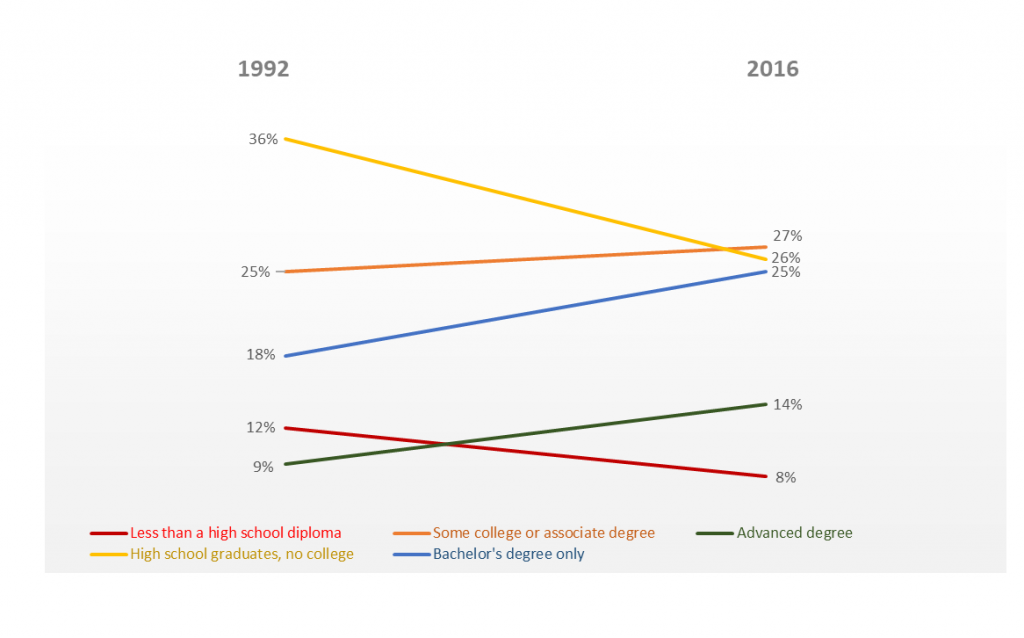 Based on Pew Research Center’s analysis of government data, jobs requiring a higher level of education and training experienced significant growth. Between 1980 and 2015, occupations requiring a higher level of job preparation (including education, experience, and job training) grew by 68 percent whereas occupations requiring less preparation increased by only 31 percent. Predominantly, occupations in Educational Services, Health Care and Social Assistance, and Professional and Business Services nearly double in size between 1990 and 2015. The majority of jobs in these sectors require at least a four-year college degree and considerable-to-extensive training and experience. More sophisticated social skills (interpersonal, communication or management skills) and analytical skills (critical thinking and computer skills) are commonly required in job categories with the highest growth. While the employment growth for all occupations was 50% from 1980 t0 2015, the growth rate for occupations demanding more sophisticated social skills and analytical skills was higher – 83% and 77% respectively. 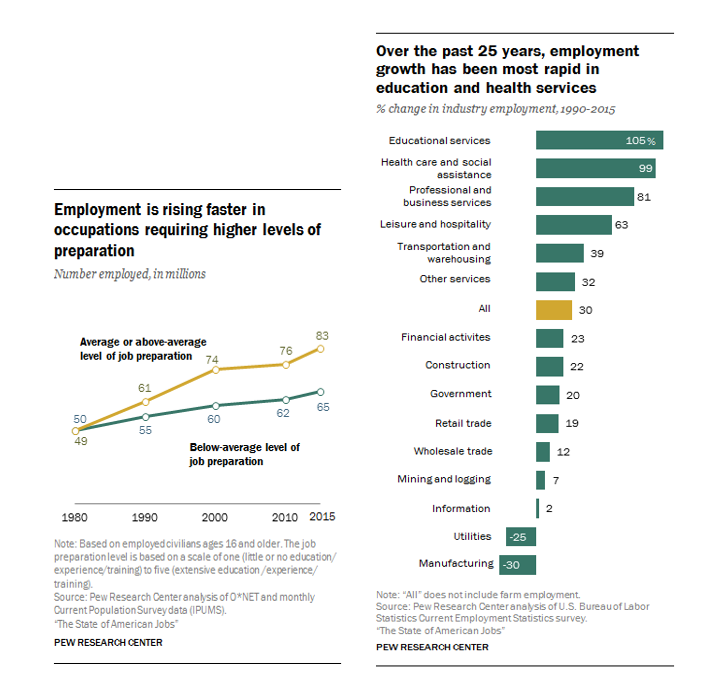 An increasing number of employers are requiring postsecondary education for jobs that traditionally have not required a college education. The Harvard Business Review termed this rising demand for a four-year college degree for jobs that previously did not require one as “Degree Inflation.” Employers are requiring a four-year-degree as a way to help ensure they are attracting employees with not only strong hard skills, but also more sophisticated soft skills.  In the report, “Dismissed by Degrees,” researchers at Harvard Business School, Accenture, and Grads of Life analyzed 26 million job postings and discovered that 6.2 million middle-skill jobs are currently at risk of degree inflation. Middle-skill jobs generally require some education and training beyond high school, but not a four-year degree (e.g., associate degree, postsecondary certificate, some college, etc.). Degree inflation limits employment opportunities for middle-skill workers in occupations such as sales representatives, clerks, secretaries, and administrative assistants. This mismatch for middle-skill jobs makes the U.S. Labor Market more inefficient by filtering out qualified non-degree applicants with relevant skills. Employers also take on additional financial burdens by paying a higher wage to college graduates for jobs that can be undertaken by non-degree holders. 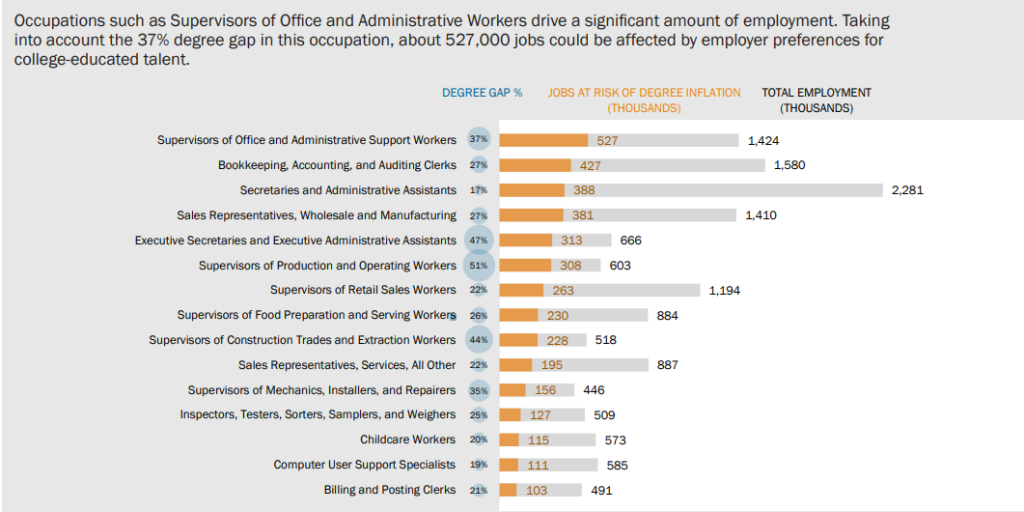 Employment is projected to increase by 11.5 million over the decade, from 156.1 million in 2016 to 167.6 million in 2026 according to the employment statistics produced by the Bureau of Labor Statistics. Jobs requiring a master’s degree are projected to grow three times as fast as jobs for people with only a high school diploma. Between 2016 and 2026, the number of jobs requiring a bachelor’s degree will increase by 10 percent, a master’s degree by 17 percent, and a doctoral degree or a professional degree by 13 percent. Conversely, the growth rate occupations not requiring postsecondary education will be slower than overall occupational growth.

Degree inflation may continue to be a barrier for some middle-skill workers. With the shifting economy, rising technological innovation, and growing demand for higher educational attainment, it is especially important that middle-skill workers attain the required set of skills needed to take advantage of the emerging job market. Increasing access to postsecondary education is important in order to better prepare our labor force and ensure they are employable in a job market that is becoming more complex. In addition, employers can provide alternative job opportunities, such as co-op programs and paid apprenticeships, for positions that are typically for middle-skill workers but require additional competencies (based on the recommendations provided in the report “Dismisses by Degree”). These types of programs can be implemented through collaboration between companies, educators, and policymakers to prepare “Middle-Skill Workers” with the required skills. All in all, to maintain a skilled labor force, it is crucial to promote college access and develop talent-management pipelines for those without a four-year college degree.