Virginia is for Lovers: Jobs in Tourism and Hospitality As the U.S. population grows increasingly diverse, Census race categories are struggling to keep up

Which places in Virginia are most attractive?

When people hear that “Northern Virginia drives population growth in the commonwealth,” or “rural communities are losing population,” they immediately think of large numbers of people moving into Northern Virginia or many residents leaving rural counties. Is this true?

In this article, we examine county-to-county (including independent cities) Internal Revenue Service (IRS) migration data, one of the key sources of information used by the Census Bureau to estimate migration each year. We look here at the 2015-2016 data—the most recent information available to the public.

We first calculated for each locality in Virginia the ratios of in-movers, out-movers, and net movers to non-movers, then multiplied these ratios by 1,000. This way we had a standardized measure of the migration flows regardless of each locality’s population size. We then ranked the ratios to identify the top 10 in each category. Figures 1 and 2 below show, for example, that for every 1,000 non-movers in Fredericksburg, there were 210 people who moved in from 2015 to 2016 and 237 people who moved out. 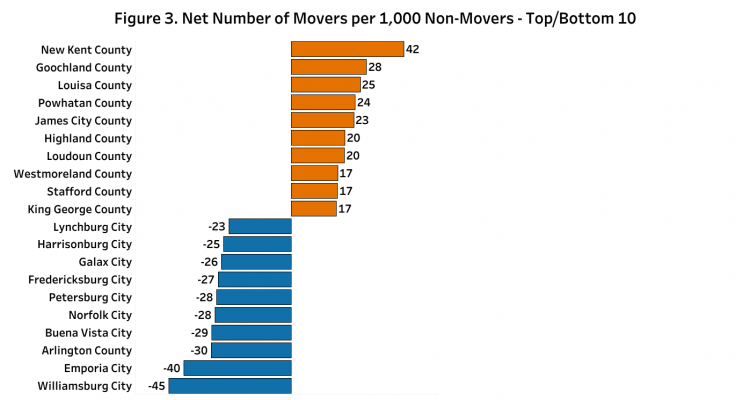 Click here to see net migration rankings for ALL of Virginia’s localities.

A few interesting patterns emerged from the rankings:

Apart from domestic migration and natural increase, international migration­–people moving in from other countries as well as moving out of the U.S.–also contributes to population change in localities throughout Virginia.