Online higher education in Virginia (before the pandemic) Demographer’s Dilemma: Challenges in analyzing consequences of COVID-19

The census, which is conducted every ten years, provides a snapshot of the general characteristics of the U.S. population, including place of residence on April 1. This year, in the midst of the COVID-19 pandemic, obtaining an accurate census count will be especially challenging for a variety of reasons: Some people may not have been living where they typically would on April 1; nursing homes in a community may have been experiencing higher mortality rates than usual; prison populations may have been reduced; and enumerators (Census workers who go door-to-door to gather data for those who have not yet responded) may not be able to reach hard-to-count populations due to health safety concerns. As a result, certain communities will likely experience an undercount or miscount of their population in the 2020 census and may receive less federal funding for critical resources, services, and programs they need.

The information obtained from the census is vital to our governing processes and provides essential information for businesses, governments, and researchers.  It is the foundation for all data collections.  On the government side, census data informs how congressional districts are redrawn and determines where government funds go. On the private sector side, businesses use the data to decide where they should set up shop. Institutions big and small use census-derived data to decide how to set goals, distribute resources, and evaluate outcomes. An accurate census is critical for all. 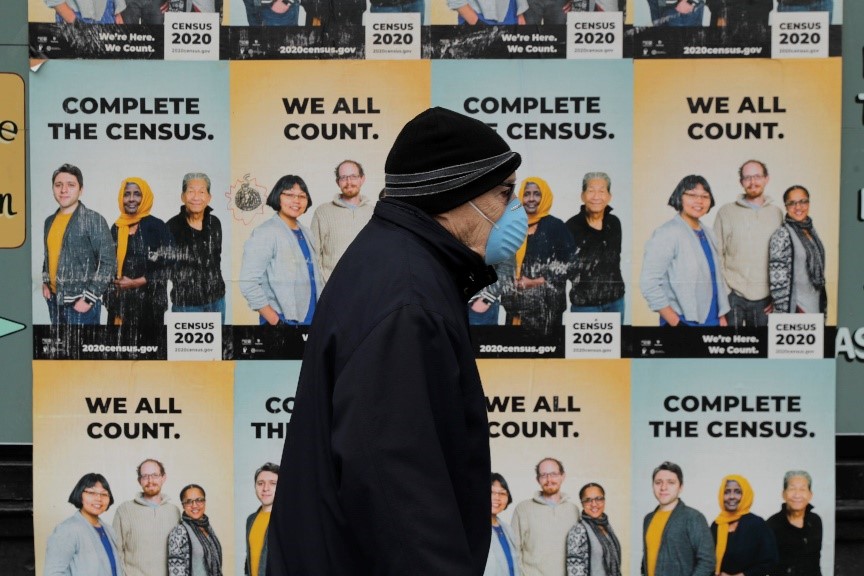 This year is the first time that census responses are primarily being collected online, with many receiving an instructional postcard in mid-March. For those who do not self-respond online, via phone, or in follow-up paper forms, the Census Bureau then sends individuals, or enumerators, door-to-door to obtain census information in person. Enumerators serve a critical role in helping to ensure everyone, especially hard-to-count populations, are counted in the census. However, in response to the pandemic, states temporarily suspended field operations with most states planning to resume in early June (most current plans can be viewed here), and the Census Bureau extended the window for field data collection and self-response to October 31, 2020[1]. However, due to the unpredictable nature of the pandemic, it may not be safe for enumerators to obtain in-person survey responses in June and even if enumerators are able to go out into the field, people may not feel safe opening the door to a stranger during a public health crisis.

Not everyone will participate online or respond to follow up paper forms and reminders. Many have misconceptions about the census, a general distrust of the government, don’t receive mail, or are simply just not aware of its importance. In prior counts, groups such as Hispanic immigrants, the homeless, rural populations, and children were difficult to count. A delayed or expedited door-to-door enumeration may exacerbate the undercounting of vulnerable groups and make it even more difficult to include these hard-to-count populations in the 2020 census results.


Overall, however, self-response rates are currently heading in the right direction despite the complexities associated with the pandemic. At the time of this writing, over half of households in the U.S. (60 percent) (figure 1) have sent in online, phone, and self-mailed responses. Virginia is slightly ahead of the nation at 65 percent, which was also the case in the 2010 census with 69 percent of Virginians completing the survey before enumerators were sent out compared to 66.5 percent for the U.S. overall. Figure 2 shows current self-response rates by county in Virginia and compares them to the final 2010 self-response rate. Many localities have exceeded their 2010 response rates, including the counties of Loudoun, Fauquier, Botetourt, Madison, and Appomattox. However, many counties have severely low self-response rates and lag their 2010 numbers, most of which are in rural areas of the state.

College towns will likely experience an undercount of population as a result of COVID-19 including the following Virginia localities: City of Charlottesville (UVA), City of Harrisonburg (JMU), Montgomery County (Virginia Tech), and the City of Lynchburg (Liberty, University of Lynchburg).

In the census, college students should be counted where they live and sleep most of the time on April 1, 2020. This means that college students should be counted at their college address (either on- or off-campus), even if they are staying at the home of a parent or guardian while on break, vacation, or due to COVID-19 closures. For those living on campus, administrators were instructed to submit a total count of students living in university-run housing before the pandemic, but with the abrupt move from in-class to online courses and students returning home in March, college administrators may struggle to submit accurate data for the on-campus student population. Off-campus students who returned to their hometowns during the pandemic are instructed to use the address of their college-area residence, following the Census Bureau’s instructions for Responding to the 2020 Census without a Census ID Number. However, it is unlikely that most off-campus college students currently living at home will have the knowledge or initiative to do so. As a result, college towns may experience lower total population counts and inaccurate age and gender data.

Similar to college students, prisoners are counted as residents of the localities in which they are incarcerated rather than their hometowns since the majority of people in prisons live and sleep most of the time at the prison. To lessen the risks posed by the current pandemic situation, many prosecutors nationwide have agreed to the early release of certain prisoners to minimize risk to inmates, prison staff, and the general public. This will undoubtedly cause these individuals to be counted in places other than expected or uncounted all together. Virginia counties likely to be affected due to large prison populations include Greensville, Nottoway, Fluvanna, and Buckingham.

Nursing homes have been linked to a large portion of COVID-19 cases and deaths. This significant reduction in nursing facility population will lead to unexpected changes in local resident counts. In addition, the ongoing and rapidly changing nature of the pandemic creates a challenge in reporting accurate data. A count could be taken before an outbreak of COVID-19, leading to population counts that are immediately imprecise.

Transient Housing Situations (people aren’t where they usually are)

Another challenge to an accurate census count is that many people are moving around and either being displaced from or voluntarily leaving their usual place of residence. Individuals with access to a second home and the ability to work remotely are increasingly staying at these “vacation home” locations. Those facing intensified financial hardship and unable to pay their rent are moving in with relatives or friends or being displaced entirely. Many are moving in with elderly relatives to support them, while young adults are moving back in with their parents.  Migrant workers who are typically in one area on April 1, may be somewhere different later in the year (eg. Farmworkers, construction workers), and thus could be counted in an inconsistent manner. The pandemic situation has also led to differing geographic needs for healthcare workers, causing many to temporarily move to harder-hit regions to fill the need.

WHY IS THIS IMPORTANT?

The upheaval caused by COVID-19 will likely result in regional population undercounts or miscounts in the 2020 census – numbers that are crucial for representation, funding, and community planning.  Communities with higher concentrations of hard-to-count populations will likely see an undercounted population in the census, which will result in less political representation and allocation of federal resources than they deserve. Other communities—like those with nursing homes, prisons, or colleges—will likely experience miscounted populations since the count that occurred on April 1, 2020, was likely not an accurate count of their population during “normal” times. Once the effects of the pandemic lessen and the total number of people in these communities returns to “normal,” an area could see inadequate hospital care, emergency response resources, infrastructure, housing, etc. Decisions made with incorrect data could result in misallocations of funding with some communities receiving too much and others too little.

An accurate 2020 census is always important, but especially now, as it will help decision-makers respond more efficiently and effectively to the current pandemic and to allocate appropriate funding and resources in preparation for the next pandemic. Census data is the primary source for determining resource allocation; without accurate numbers leaders cannot appropriately respond to a health crisis like the one we are currently experiencing, and undercounted communities will suffer the most. When a coronavirus vaccine becomes available, it will be distributed based on population numbers, which inform a standardized, per-capita infection and testing rate. If the population of a community is undercounted, it might not get the volume of coronavirus vaccine it needs.

There may be a few positive effects of the pandemic on the 2020 census. With people spending more time at home, there is potential for a higher self-participation rate as people have more time and are home to answer their mail. Prior to the pandemic, the Census Bureau had a very hard time recruiting workers because of the strong economy, but now with a record unemployment rate, there will likely be a surplus of available workers.

As a result of COVID-19, people are seeing firsthand the importance of local resource allocation and effective governance, which is directly related to an accurate census. In this current pandemic, information gathered from the census can, for example, be used to track rates of infection or determine how many hospital beds or the amount of the coronavirus vaccine a community needs. Understanding more acutely the importance of good census data may inspire more people to complete the 2020 census.

[1] The Census Bureau’s deadline for field data collection and self-response is now October 31, 2020. This extension will allow for apportionment counts to be delivered to the President by April 30, 2021, pushed back from the normal December 31st deadline. The entirety of the data is typically delivered to the states and publicly published by the end of March on the year following the census; however, this has been pushed back to “no later than July 31, 2021”.