How accurate are our 50-State population projections?

Who Practices What Religion Where in Virginia?

Both of us—one a demographer and one a religious studies grad student—have long been interested in the demographics of religion. Teaming up allowed us the opportunity to merge personal interest with professional curiosity and explore the religious makeup of Virginia and its localities—specifically, the importance of geography in determining a region’s religious characterization. Were individuals more likely to live in a certain location if they practiced a particular religion? Does the assumption that major metro areas are more likely to harbor diverse religious communities’ hold true within the Commonwealth? 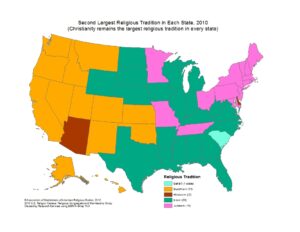 Figure 1: Largest Non-Christian Religious Group by State in 2010  (Click on map to enlarge)

Looking at national religious trends, Christianity continues to be the dominant religion in the United States. In many respects, the Commonwealth of Virginia mirrors the religious attitudes of the nation. 73% of VA residents self-identify as Christian, just above the national average of 71% found by the Pew Research Center. Of those that do not identify as Christian, 20% reported being religiously unaffiliated, while only 6% identified with a non-Christian religion. Islam is the second largest religious group in VA, as it is in most of the southern U.S., including VA’s neighbors of West Virginia and North Carolina.

Data on religious identity is often collected either by polling individuals (who may or may not identify with a religious tradition) or by surveying religious institutions and their affiliated membership. The U.S. Religion Census2, accessible through the Association of Religious Data Archives (ARDA), provides a glimpse of the overall religious landscape and focuses on the rich tapestry of practitioners (congregations and adherents3) across the country.

Among all Virginians, religious adherence falls across a broad spectrum. As illustrated in the pie chart below, 55% of the resident population is not affiliated with any particular religious body (church, synagogue, mosque, etc.) even though some might consider themselves religious, 19% are Evangelical Protestant, 11% Mainline Protestant, and 8% Catholic. Five percent fall into the “Other” category which covers the many non-Christian religions practiced in Virginia, including Buddhism, Hinduism, Judaism, Mormonism, and Islam, for instance. 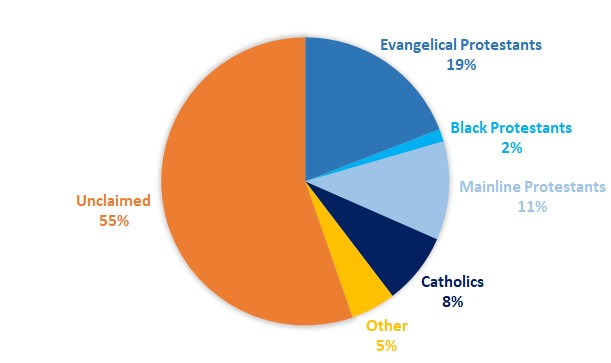 The data from ARDA allowed us to see what religions Virginians practiced and where.  The results were somewhat surprising. While it is true that VA’s major metro areas, including Richmond city and the counties surrounding Washington D.C., boast some of the most diverse religious communities, if we look at the percentage of residents in more rural counties who practice non-Christian religions, we find many have an adherence rate higher than or on par with some of these larger metro localities.

If we look at congregation counts, we find the most religious variation is within major metro areas. The larger the population within a county, the more people there are to attend religious services, hence a greater likelihood that the county is home to more congregations. For instance, Fairfax County in northern Virginia, which has twice the population as the next most populated county, Prince William4, is home to 627 religious congregations. Fairfax also boasts the most religiously diverse congregations, with more Buddhist, Hindu, Jewish, Mormon, and Muslim congregations than any other locality in the Commonwealth. In contrast, Charles City County, VA’s 12th least populated county, is home to the smallest number of congregations at nine total, all of which are Christian denominations. VA’s least populated locality, Highland County, home to less than 2,500 residents, has 20 congregations, all of which, again, are Christian.

By comparing the concentration of congregations, VA’s major metro areas look diverse and its rural areas look more homogenous. Figure 3 lists the top three localities that have the most congregations affiliated with either the main Christian denominations or non-Christian religions.

Figure 3: Localities with the most congregations in order of first, second, third 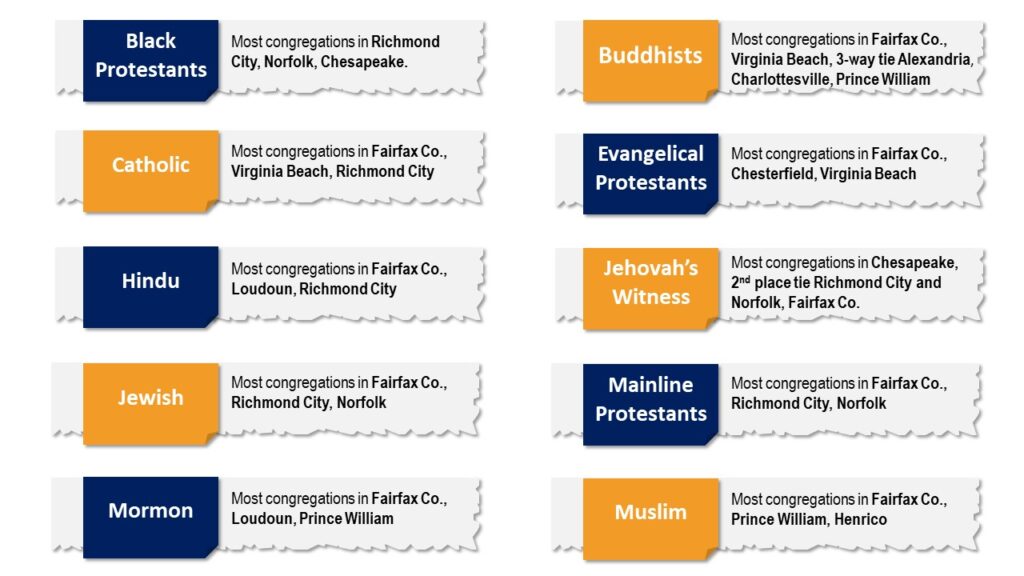 Let’s say, for example, we wanted to compare the Muslim population in Loudoun and Montgomery Counties. Both locations have two Islamic congregations, so by this measurement they look identical. However, when we look at the adherents in each county, the differences become stark. Although both house two congregations, Loudoun County has 27,436 Islamic adherents compared to Montgomery County’s 3,686, a large difference indeed. If we want to take the comparison one step further, we can look at the number of adherents per 1000 residents. This allows a per-capita proxy measurement to understand how diverse a given locality might be according to its population size. Comparison by this standard shows Montgomery County has 39.04 Islamic adherents per 1000 while Loudoun County has 87.84 per 1000 residents, according to the 2010 Religion Census.

The adherence metric allows us to see a more nuanced picture of VA’s religious makeup, and by comparing the adherence rate across locations we can disprove the hypothesis that only VA’s metro areas contain diverse religious populations. Consider the heat maps below for all religions and minority religions within VA – the darker the color, the higher the percentage of adherents there are in that location. 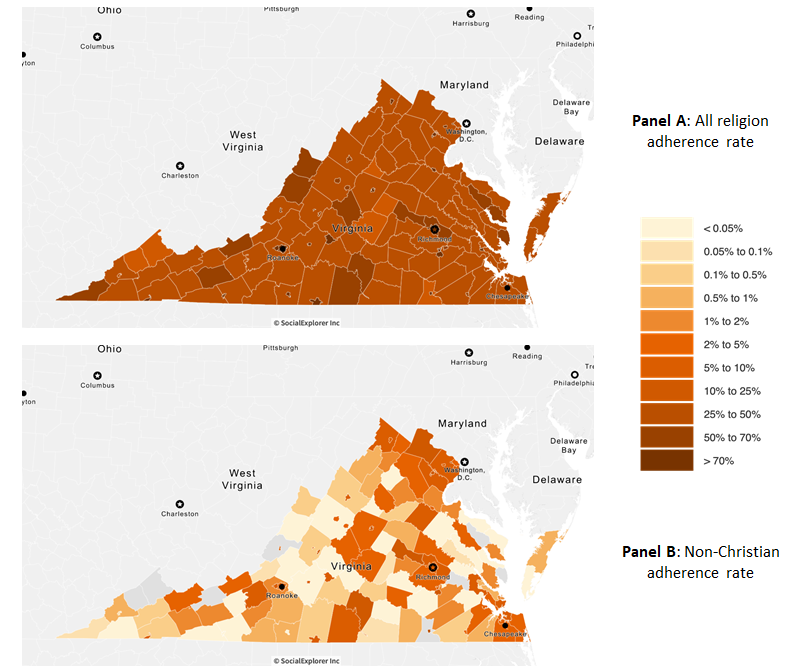 In Figure 4-Panel B, notice the lack of correlation between geography and religious minorities. Although most metro areas reflect darker shades of red, so do many locations in VA’s rural communities, including Charlotte County in southern VA and nearby Danville City. While minority religion adherents make up over 10% of the population in only nine counties and incorporated cities, outlier counties with high minority religion adherence rates help to highlight the geographic spread. We might expect that 34% of northern VA’s Falls Church City population belong to a non-Christian religion, but the 29% of southern VA’s Emporia City residents who also belong to a non-Christian religion help us see that minority religion adherents are found throughout the Commonwealth.

Even with the wide distribution of religious minorities and diverse communities within the Commonwealth, the majority of Virginia residents identify as Christian. How this characterization might develop over time remains to be seen.  In the short run, factors such as coronavirus caseloads and vaccination rates will lead to an evolution in the manner of worship and religious services offered. How and at what rate VA’s religious identity has changed will be revealed in the next U.S. Religious Census—the results of which we eagerly await.

1. It’s important to note that different polling agencies have different data on America’s religious life. Pew and Gallup conduct surveys of sample populations where individuals are asked to self-identify their religious leanings. The U.S. Religion Census polls churches and religious institutions for their membership data. Self-identifying surveys tend to have higher reported rates of affiliation as they capture individuals who identify with a religious tradition, but nevertheless do not attend services.

2. The 2020 Religion Census is underway but data from it will not be available for a while yet. Instead we rely on the 2010 U.S. Religious Census conducted by the Association of Statisticians of American Religious Bodies and published by the Association of Religion Data Archives (ARDA) housed at Pennsylvania State University. This sweeping report conducted every ten years contains statistics for 236 religious groups, including congregation counts within each state and county in the U.S. and, where available, membership and adherent figures.

3. The U.S. Religion Census considers adherents to be any regular participant of a congregation. This includes full members, their children, and participants who may not be considered members but nonetheless attend services regularly. Similarly, religious adherence refers to individuals that follow a particular religion. Adherence rate is the number of adherents per 1000 residents.