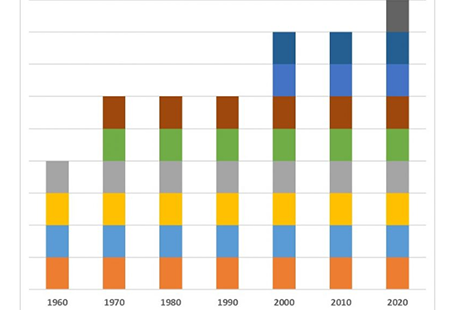 How COVID-19 could impact the 2020 Census
Certain communities will likely experience an undercount or miscount of their population in the 2020 census and may receive less federal funding for critical resources, services, and programs they need.

Census 2020 may count everyone in the right place but we won’t see it in the reported results
Alarmingly, even if data collection in this Census is complete and perfect, the data released will be far from accurate due to the implementation of a new approach to data privacy named by the Census Bureau as “Differential Privacy Disclosure Avoidance System” (DP).

As the U.S. population grows increasingly diverse, census race categories are struggling to keep up
The decades since the projections cited by President Clinton have proven his point to be accurate: America’s population has grown considerably more diverse. But what the projections didn’t forecast is that the populations of each race would also become significantly more diverse by becoming more multi-racial and multi-ethnic.

Misconceptions about the census
Myth 1: “If I don’t respond I won’t be counted.” The decennial census is not voluntary. Nearly three out of four individuals surveyed by the CBAMS were unaware that census participation is required by law.

Census data: Indispensable intelligence for the nation
The census counts everybody living in the U.S. and is the foundation for all data collections. On the government side, census data informs how congressional districts are redrawn and determines where government funds go. On the private sector side, businesses use the data to decide where they should set up shop. Institutions big and small use census-derived data to decide how to set goals, distribute resources, and evaluate outcomes.

Power and money: Why the census is important
A successful and accurate census will ensure: (1) equal and fair representation, (2) that every community receives the funding to which they are entitled; and (3) that policymakers can make better informed decisions.