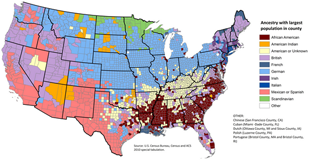 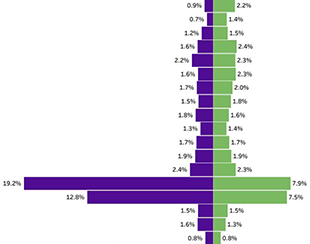 Power and money: Why the census is important
The interactive map displays the loss or gain in seats from the previous census, along with the projected change following the upcoming 2020 count.

Visualizing the nation’s future population
View this post for a few examples of how you can use the tool to visualize some of the key demographic trends reflected in the national projections.

Visualizing the age structure of Virginia’s local and regional populations
This post features an interactive data visualization that shows population pyramids for the Commonwealth of Virginia and each of its localities and regions.

Taking a look at fertility trends
This blog post uses animated graphs to show how U.S.A. fertility rates have changed over time and how they might look in the future.

Visualizing commuter flows in the Charlottesville area
This commuting visualization shows where workers are coming from and what the flow exchanges in the area look like.

10 ways to map Northern Virginia
Today, the entire state bears the marks of a massive post-1960’s influx of migrants from other parts of the country, while other regions have also developed their own character.

Even more evidence for the new donut
A while back, I wrote a post on the transformation of US cities over the last two decades, using Charlotte, Houston, Atlanta, and Denver as examples. That investigation, using graphs to show changes in the city from the core to the periphery, turned into a larger report that looks at 9 variables in 66 cities, including the 50 largest metropolitan areas.

A funny thing is happening in many U.S. cities
Mapping demographics data of outer and inner suburbs in Atlanta, Charlotte, Denver, and Houston reveals the emergence of a new “donut.”

The New Racial Dot Map
The new Racial Dot Map is an American snapshot; it provides an accessible visualization of geographic distribution, population density, and racial diversity of the American people in every neighborhood in the entire country.

One dot, one person population density maps for Virginia cities
The dot density map of U.S., Canadian, and Mexico census data by MIT’s Media Lab got a lot of attention…so we decided to give it a try ourselves, taking a deeper look into census data for Virginia’s major urban centers and smaller cities.

Ancestry: Who do you think you are?
The map shows the most commonly reported ancestry for each county in the United States in 2010.

Animating historical county boundaries and Census data
With data from the Atlas of Historical County Boundaries, one can animate how America’s political boundaries have changed since the founding of the Massachusetts Bay and Virginia Colonies.

Data visualizations created by others

The Census Bureau’s new language mapper
As far as afternoon diversions go, the latest language use visualization from the U.S. Census Bureau is one of the more entertaining.

Job gains and losses, 2007-2012
Using Bureau of Labor Statistics data, the Pew center published an interactive graphic examining annual percent changes (April to April) in the number of employed persons in each state between 2007 and 2012.

An interesting visualization of gay rights in the United States by state and region
The Guardian Interactive posted an interactive infographic depicting gay rights in each of the 50 states and D.C.

Demographics and infographics
Check out two really neat infographics by Nathan Yau, a PhD candidate in statistics at UCLA and author of FlowingData.