Where VA legislators went to college 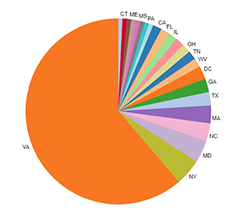 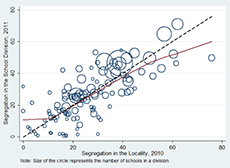 Where do children in affordable housing go to school? (part II)
A series of two posts narrow in on the reality Virginia that most kids who who grow up in subsidized housing are more likely to live near low-performing schools. This second post explores (1) where subsidized housing is located in Virginia and (2) how this relates to school quality.

Where do children in affordable housing go to school? (part I)
A series of two posts narrow in on the reality Virginia that most kids who who grow up in subsidized housing are more likely to live near low-performing schools. This first post gives a statewide overview at the neighborhood level of both (1) school quality as measured by the HUD school proficiency index and (2) housing cost as measured by median housing value.

It’s time to think about middle-skill jobs and education
Middle-skill pathways—education beyond high school, but less than a bachelor’s degree—can help people achieve success in the labor market by teaching skills that are in high demand. According to the Virginia Employment Commission, as of 2016, there were 2.4 million middle-skill jobs in Virginia, and by 2026 that number is expected to increase by 200,000.

Talent in Virginia: Where is it coming from and where is it going?
With urban areas facing affordability issues, the expansion of telework and broadband capability, and the growing desire to live in small towns, the rural areas of Virginia may soon become the place to get an education and stay for a while.

Helping first-gen students: first find them in high school
What factors discourage, or even prevent, high school students from applying for admission to Virginia’s many fine postsecondary institutions?

The Goldilocks problem: Enrollment trends are not being kind to Virginia’s schools: In many of Virginia’s localities the number of children enrolled in their schools is beginning to decline while their population continues to grow.

The demographics of declining college enrollments
College attendance has climbed over the years to the point where an overwhelming majority of American young people will enroll in college. This is not enough to keep up with the overall decline in college-aged adults.

Metropolitan cross-sections: College graduates
The percentage of adults with bachelor’s degrees is an interesting proxy for studying gentrification.

Education in Virginia: Doing it at home: In 2012, there were more than 10 times as many homes schooled students in Virginia than there were in 1989.

As more families choose cities, governments are returning to the drawing board: More young families are staying in Virginia’s urban areas to raise their children and enroll them in local schools.