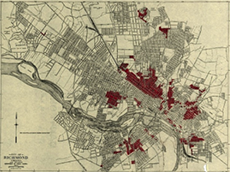 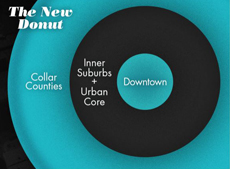 Visualizing commuter flows in the Charlottesville area
This commuting visualization shows where workers are coming from and what the flow exchanges in the area look like.

The post-recession shape of American cities
Many cities that looked like they had changed the least before are now starting to show signs of moving in the new donut direction.

How is New York City growing if it’s constantly losing people?
Year after year, some of the nation’s most dynamic cities are also the nation’s biggest losers when it comes to migrants.

Driving alone: how Virginians get to work
While most Virginians drive alone, this post explores who is more likely to use an alternative mode of travel to work.

Richmond’s quiet transformation
Sometime soon after the census in 2010, blacks in Richmond were no longer the majority of population.

How Virginians get to work
See how and when Virginia employees commute.

Are the “urban millennials” a real thing?
Unlike 20 years ago, millennials are disproportionately living in urban areas. Is this a shift in attitude or the result of larger economic or demographic forces?

A funny thing is happening in many US cities
Demographics of outer and inner suburbs in Atlanta, Charlotte, Denver, and Houston.

Average density of Virginia’s metro areas
Virginia’s cities have different density patterns. What does your city look like?

The line that divides DC
It is not a party line, but a demographic line.

As more families choose cities, governments are returning to the drawing board
More young families are staying in Virginia’s urban areas to raise their children, fueling the strongest population growth in these areas since the 1950s.

Predicting sprawl
Sprawl depends on several factors. See how it could play out in Virginia.

A closer look at MSA’s and commuting
See the bedroom communities for Virgina’s major cities.

Virginia’s 2013 metro areas
Identifying a metro area is harder than you think.

What are young people up to these days?
Where in Virginia are Millennials choosing to call home? Primarily college towns and areas with economic growth.

The Changing Shape of American Cities
The last two decades have brought dramatic changes to many American cities. Most cities in the United States in 1990 had a “donut” shape, with wealthier residents in a booming suburban ring surrounding a decaying core. Today cities are increasingly resembling what has been called a new donut – with three, rather than two rings.

Charlottesville City: Census 2010
This article focuses on the demographic changes that have occurred in and around Charolottesville over the past decade, with a particular focus on the city’s neighborhoods. 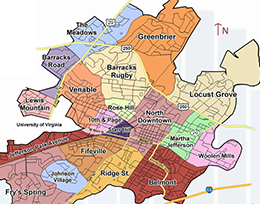