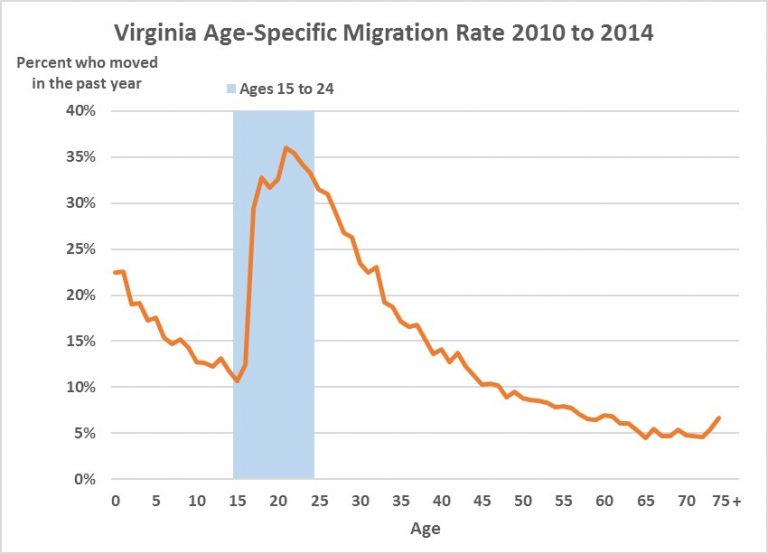 Data is from the 2010-2014 American Community Survey, accessed using University of Minnesota, IPUMS 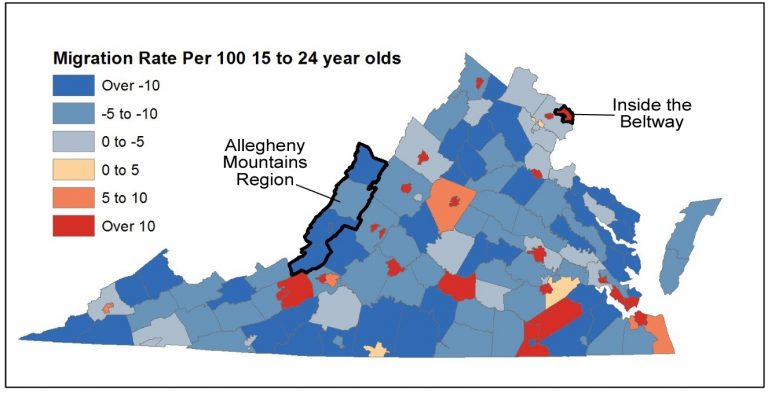 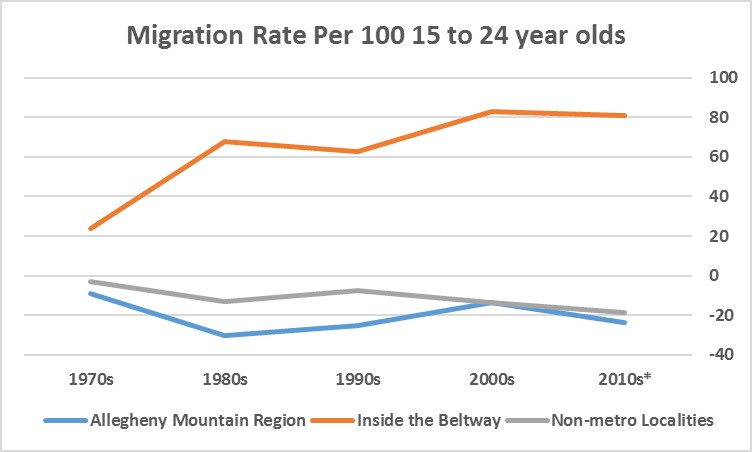 Data is from the Decennial Census and the 2015 Census County Age Estimates, The Allegheny Mountain Region includes: Alleghany, Bath, Craig and Highland County, as well as Covington city. Inside the Beltway includes: Arlington County and the cities of Alexandria and Falls Church.

Among the localities situated in Virginia’s Allegheny Mountains, the out-migration rate of their 15 to 24 year old population rose from 7.1 percent between 2000 and 2005 to 12 percent in the last five years. The loss of so much of rural localities’ young population in recent decades is transforming the age distribution of their communities. In the Allegheny Mountain Region, the out-migration of young adults has caused the 18- to 29-year-old portion of the population to shrink to only 12 percent compared to 17 percent statewide. Similarly, the 30 to 39-year-old age group now makes up 9 percent of the region’s population compared to 14 percent statewide. With fewer young adults to start families, the under age 18 portion of the region’s population has in turn declined to well below the statewide proportion.

Data is from the 2015 Census County Age Estimates

Many of Virginia’s urban areas and communities with universities are experiencing the opposite trend. Among Virginia’s localities inside the Washington Capital Beltway, the in-migration of 15 to 24 year olds has caused their young adult share of the population to become larger than statewide rates. Alexandria City and Arlington County have the largest proportions of adults in their 30s in Virginia at 23 and 22 percent respectively. Even in localities outside large urban areas that have a university, such as Montgomery County, former students often remain in the community boosting the size of their workforce as well.

The rise in college attendance rates and the common need to move to large urban centers for graduates to find jobs are both likely helping drive the increasing flow of young adults into Virginia’s urban areas and communities with universities. The inflow of young adults into Virginia’s cities has boosted their workforce noticeably and helped support the revival in growth that many cities in Virginia are experiencing. But as an increasing share of young adults have remained in cities after starting families, it has also forced many urban localities, such as Arlington and Falls Church, to reevaluate their long-term planning as demand for housing and school spaces have surged.

If all this sounds a bit gloomy for rural counties, keep in mind that the large majority are still attracting more people than they are losing, and in many cases their populations are growing. While nearly every rural county is losing a large portion of their young population, most are attracting an even larger number of older people, including retirees. Many of the older people that rural counties are attracting are likely the same ones that moved away for college or work decades ago.