In December, the Census Bureau released its annual state population estimates, which showed that Virginia grew by 44,000 residents last year, its smallest numerical gain in population since the 1970s. The main cause of Virginia’s slower growth is that, for the past three years, more people have been leaving Virginia for other states than moving in. Prior to 2013, IRS tax return data (which the Census Bureau uses to track migration) had never recorded out-migration from Virginia since the IRS began publishing the data in 1978. 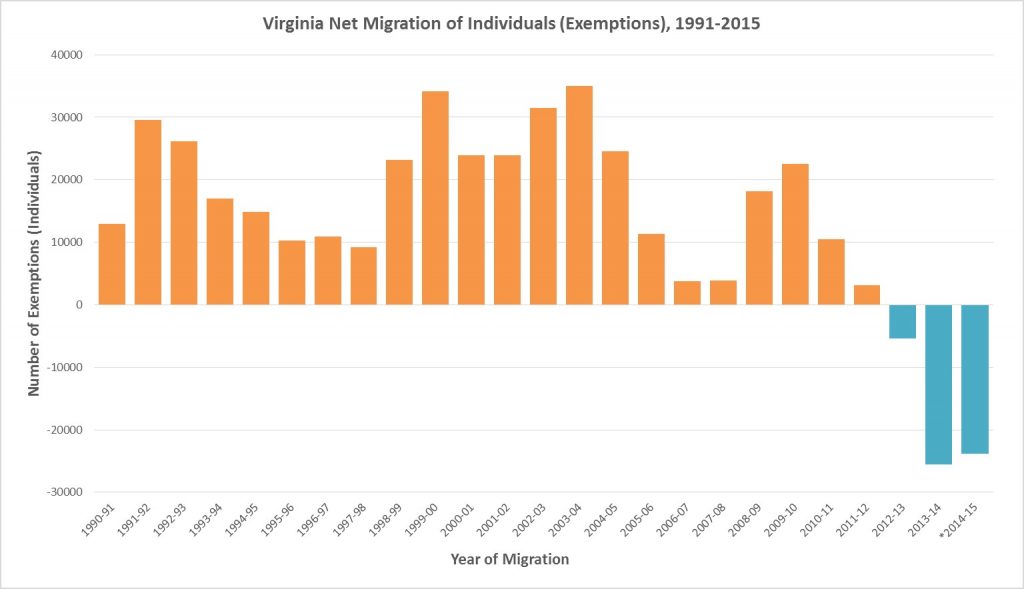 The most obvious reason why more people are leaving Virginia than moving in is the state’s economy, which has lagged behind the rest of the country since 2011, especially since the federal budget sequestration began in early 2013. Prior to the budget sequestration, Wells Fargo Securities ranked Virginia, Maryland, and the District of Columbia as the areas most dependent on federal spending.

Since 2013, Northern Virginia in particular has been losing residents to other states. Fairfax County, which contains over a third of Northern Virginia’s population, has experienced a significant rise in residents moving to metro areas with healthier economies, such as Houston or Los Angeles. 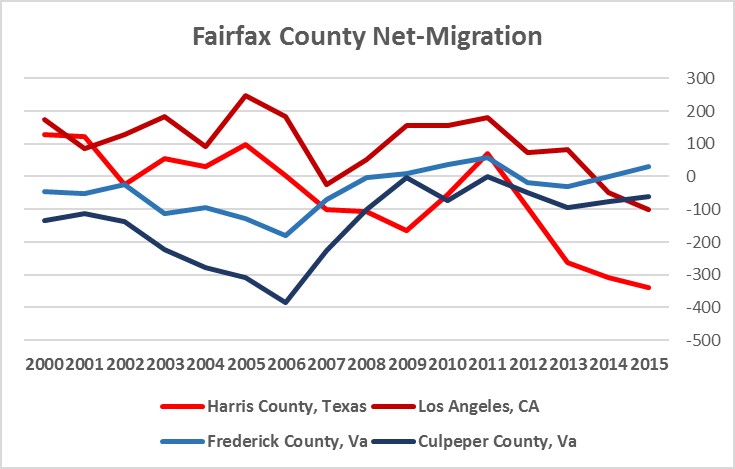 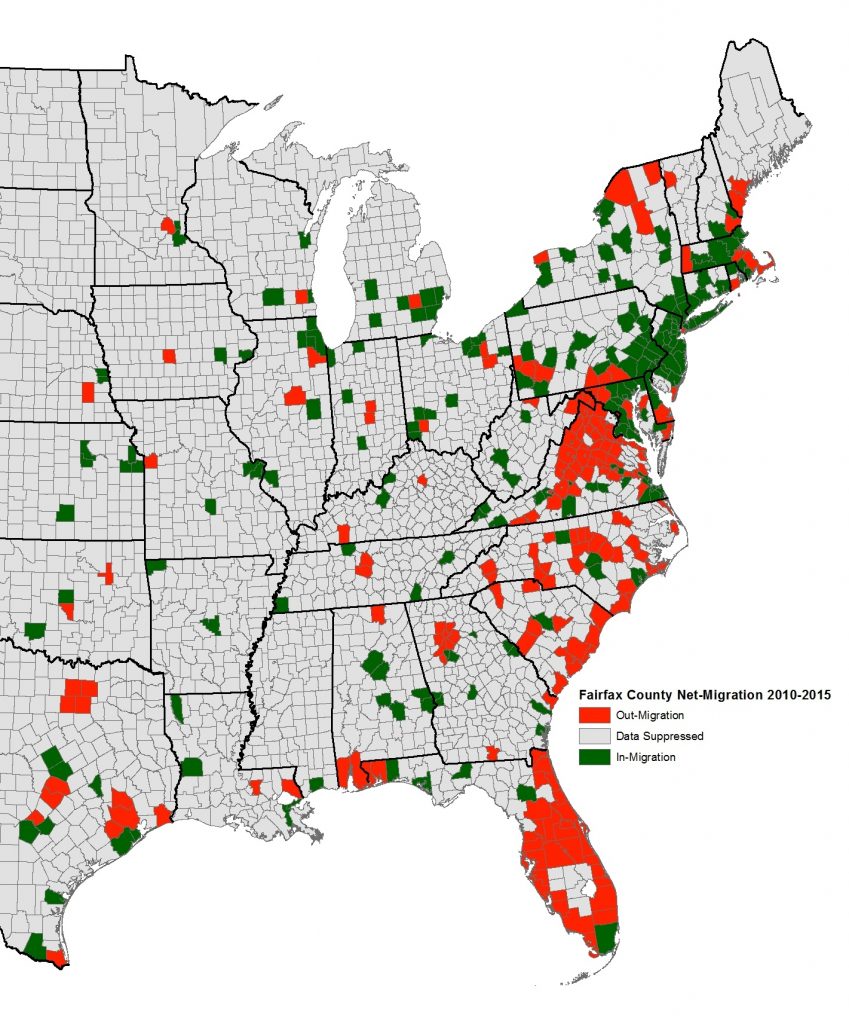 In recent decades, the majority of Virginia’s communities outside the Urban Crescent—which contains Northern Virginia, Richmond and Hampton Roads—have lost much of their young adult population when they left for college or work. But this out-migration was usually more than made up for by young families that moved in from the large metro areas, often attracted by the lower cost of living and change in lifestyle smaller communities offer. Many young families might have another child or two, further boosting their community’s population. Today, with more young families in Northern Virginia moving out of the state, most counties in Virginia do not have enough births to make up population lost to deaths. 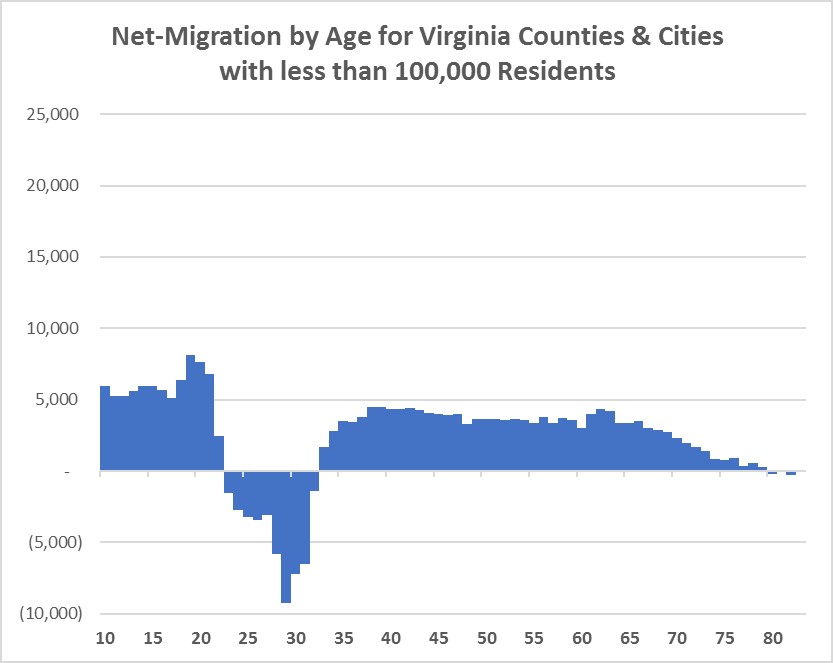 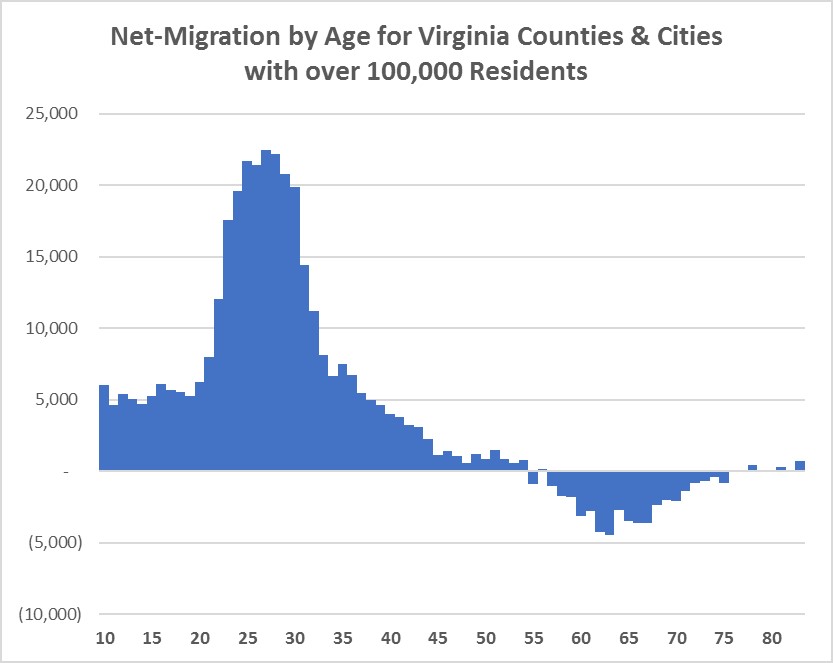 The fact that more of Northern Virginia’s residents are moving to metro areas out of the state rather than to small communities in Virginia is likely a result of the federal budget sequestration but also a symptom of national trends; smaller, predominantly rural communities throughout the U.S. are not attracting as many families as in the past. Many young adults have delayed marriage and parenthood, likely in part due to the slow recovery from the recession. This suggests that even if the new administration and Congress decide to end the federal budget sequestration, Virginia’s smaller communities won’t necessarily see increased in-migration and population growth as a result.